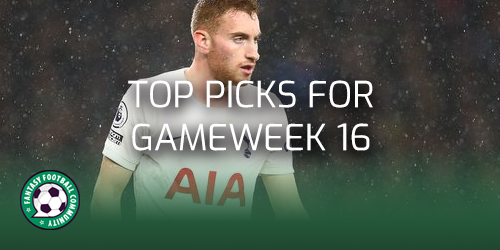 Filling in for David Munday’s regular look at the Gameweek’s top picks is Marc Jobling. Here, Marc selects who he thinks will be three of the top players for Gameweek 16.

As it’s the final round before the World Cup break which gifts unlimited free transfers for Fantasy Premier League (FPL) managers, this week’s move can be a one-week punt in a glorious attempt to fly up the rankings.

Gameweek 15 was bad for FPL forwards. Ivan Toney was suspended, Erling Haaland only made a cameo, Gabriel Jesus blanked and Aleksandar Mitrovic surprisingly didn’t take part at all. Callum Wilson and Gianluca Scamacca failed to make the second half, whilst Dominic Calvert-Lewin barely lasted longer before coming off injured.

So I’ve picked out three top picks in midfield that could have a solid impact on your team this week.

Hardly a shock to see FPL’s priciest player be called one of the top picks, I know, but Salah seems back. A goal in Liverpool’s defeat to Leeds preceded a brace at Spurs from a more central position up front.

Whilst over a million managers have sold Salah since Gameweek 12, nobody has more shots on target from their last two matches.

Up next is managerless Southampton, a side that Salah has bagged five goals and two assists against during his five Anfield meetings.

Fool me once, shame on you. Fool me twice, shame on me. But what about fooling me a third time?

Incredibly, the early team leaks of Gameweeks 14 and 15 brought more news that Foden wasn’t starting. However, and I’ll be careful here, surely being fully-rested during Wednesday’s cup tie means he starts against Brentford. Haaland, Kevin De Bruyne and Ederson were also unused substitutes.

If he starts, the midfield wizard remains a great FPL option. Perhaps a differential too, considering how many have been forced to ditch him.

In 2022, only De Bruyne (18) has assisted goals more often than Kulusevski (13). It’s even more impressive considering the Swede has only started 20 of Spurs’ 32 league fixtures in that time.

His cameo at the weekend brought his first minutes since Gameweek 8 and, naturally, he set up Harry Kane’s consolation. Ahead of Richarlison in recovery, both came on after 59 minutes of the midweek cup defeat. Also, thankfully for Spurs, he’s returned just as Son Heung-min has picked up a facial problem.

Therefore you can expect Kulusevski to start at home to Leeds in Gameweek 16 – a very enticing fixture.