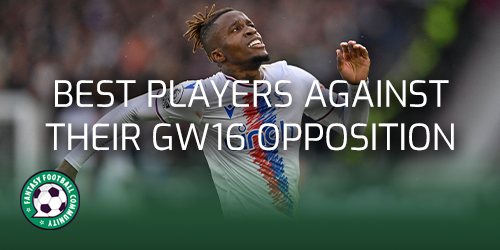 We take a look at some of the best players against their Gameweek 16 opposition. Using previous head-to-head records and underlying stats from the Fantasy Football Scout members area to help us pick out some great FPL picks for the round ahead.

Picking out the best players against their Gameweek 16 opposition could be helpful in making both transfer and captaincy decisions. The more information FPL managers have the better our decisions tend to be in terms of having successful assets in our fantasy teams.

Manchester City midfielder Kevin De Bruyne (£12.6m) has been one of the most consistent FPL assets in the game this season. The Belgian ranks as the fourth highest scorer in the game. De Bruyne has managed to return in a massive 10 matches from the 13 matches he has played so far.

As we can see below De Bruyne has managed to play just two matches against Brentford. However, he has returned points in both of those matches. His 19 points against his Gameweek 16 opponents consist of one goal and one assist.

The Crystal Palace midfielder has been on and off with returns all season. Wilfried Zaha (£7.5m) has produced returns in half of the matches he has played this campaign. Many within the FPL community flocked to him when his positive fixture run arrived.

We can see that Zaha has an absolutely fantastic record against newly promoted teams in the past. In fact, in the last 19 matches he has played against them, he has returned in 11 of them. That huge success consists of eight goals and seven assists.

West Ham midfielder Jarrod Bowen (£8.1m) became one of the standouts options in FPL last season. The Englishman managed to rack up more than 200 points in the game. Unfortunately, managers are yet to see similar success this season so far.

Bowen does have a great chance to retain his previous form in the round ahead. As we can see below, the winger managed to hit three returns in his four matches played against Gameweek 16 opponents Leicester. His points include two double-digit hauls.

Mohammed Salah (£12.7m) has become a FPL legend during his Liverpool career. The relentless output we have often seen has been somewhat lacking this season. Although that is the case, Salah’s form has been improving and so has his FPL output.

Not only has Salah hit back-to-back returns for the first time since last season but he also has a fantastic record against his Gameweek 16 opponents. In the nine matches Salah has played against Southampton, he has returned in seven of them. Of those seven returns, three of them were double-digit hauls.