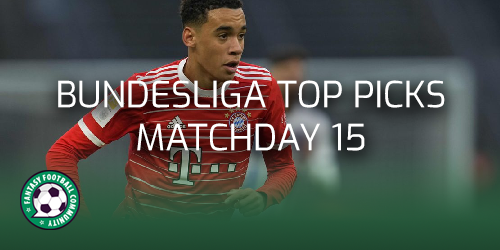 FBL Thinker is an expert at the Fantasy Bundesliga game and here he shares his top weekly picks for Matchday 15.

The final weekend before the World Cup will be extremely tricky to navigate, as most teams will rotate after midweek fixtures. So I have tried to pick those who are safest in terms of minutes and play for teams where rotation is minimum.

Musiala has stepped up big time this season and scored his ninth goal of the season last time. With Sadio Mane ruled out and doubts over Thomas Muller’s fitness, he looks like the best Bayern forward for their game against struggling Schalke.

A consistent pick, playing for a good Freiburg team and also offering the flexibility of a standalone fixture. Playing against Union Berlin, who are going through a bad run of form and conceding lots of chances, Gregoritsch can be the man to profit from these and bring in some attacking returns.

One of the most consistent Fantasy assets in the game bagged another double-digit score in Matchday 14. With rotation generally expected, Kimmich is one of the safest picks for playing 90 mins and has a good-looking fixture.

Grifo is the main attacking threat for Freiburg and has all set pieces and penalties. Rested midweek in the defeat to Leipzig, he could prove to be a good option considering Union’s rate of conceding from set pieces.

Gunter playing last on the Matchday offers flexibility in defence and he can have a really good game contributing at both ends of the field as most of Freiburg’s attacks originate from the left.

A match against the poor Hertha means that left-back Hector is another good option for both ends, as he will combine with Florian Kainz to create chances.

Though Freiburg conceded three times goals against Leipzig, their defence remains one of the best around. Behind that, Flekken has a good chance of keeping a clean sheet against Union Berlin at home.

Casteels put up a good show against Dortmund, saving six shots whilst keeping a clean sheet. Up next are Hoffenheim, who have suffered two successive losses, meaning Casteels continues to be a viable option.