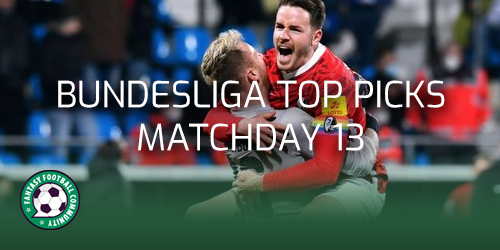 FBL Thinker is an expert at the Fantasy Bundesliga game and here he shares his top weekly picks for Matchday 13.

With a matchday full of goals where Bayern Munich put six past Mainz and Wolfsburg scored four against Bochum, we move onto Matchday 13 expecting another goal fest.

Below are my picks for the weekend.

Thuram gives flexibility this week by having a standalone fixture and facing Stuttgart at home, who have conceded a high number of goals and chances.

In-form Füllkrug scored in the last match against Hertha Berlin. At home to basement-dwellers Schalke, he is an essential pick for this week against the defensively-suspect poor travellers.

By scoring a brace in the last game, Grifo has been one of Freiburg’s big players of late. One of the most consistent Fantasy players has a match against a Koln side that has been hit with injuries and a dip in form. This combination makes attacking returns very likely for Grifo.

Nkunku was last campaign’s player of the season and single-handedly ensured Champions League qualification with his 20 goals and 13 assists. He has finally re-captured this form, scoring in his last two outings and being central to Leipzig’s attacking play. Against Hoffenheim, he is looking like a very good asset to own.

Schlotterbeck was the best defender of last season and has a good base for gathering points via challenges won and the occasional goal from set pieces. With a home game against second-bottom Bochum, a clean sheet looks likely and he could also boost this with some attacking returns too.

The game’s highest-scoring defender has back-to-back double-digit scores, showcasing the incredible value he offers. He plays against struggling Koln in a standalone kick-off, which makes him a handy defender to own this time.

Sticking with Freiburg, their defence is looking good after keeping consecutive clean sheets against Bremen and Schalke.

Table-toppers Union have been very good defensively, conceding just nine times from 12 matches. They have a tricky away game at Leverkusen but I wouldn’t put it past Rønnow to excel here too.