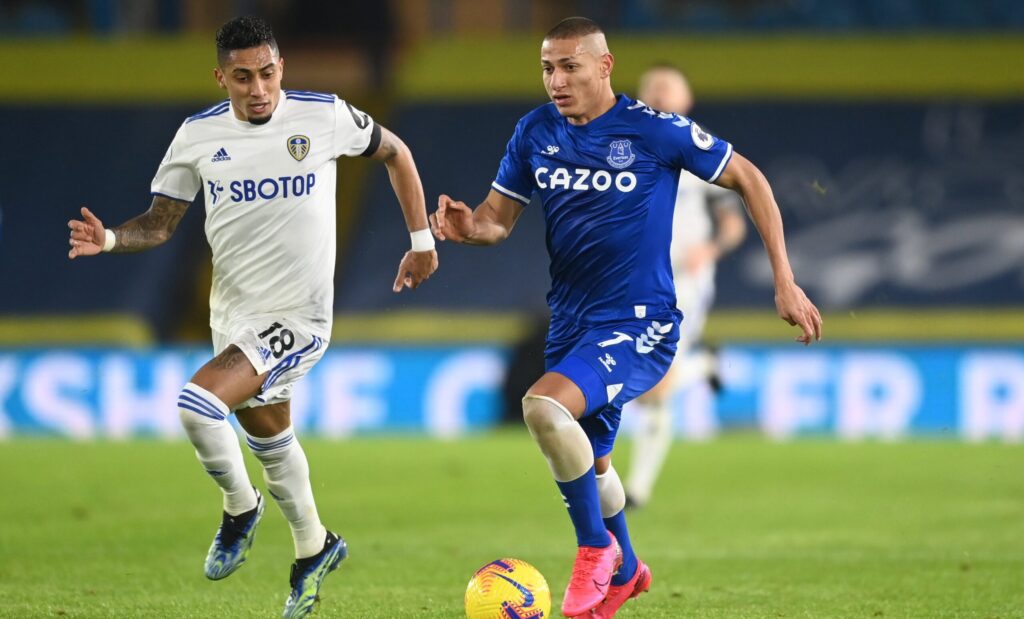 None of the three relegation spots has yet been decided. Therefore, having something to play for adds an attraction to several FPL players.

Following last month’s look at FPL targets from the bottom six, it’s time to reassess under newer circumstances. Double Gameweeks have been formed, form has changed and one manager has been sacked.

All of the bottom five have at least one Double Gameweek remaining, with two pairs for Everton. They look particularly daunting for Leeds, although a 33 points tally likely isn’t far off survival. Alternatively, Watford and Norwich have a generous fixture run but look resigned to relegation.

If Leeds beat Crystal Palace on Monday night, they’ll be relieved to reach 36 points heading into a trio of matches versus Man City, Arsenal and Chelsea.

Raphinha (£6.4m) is their star asset but exists in a competitive price bracket of mid-priced midfielders. James Maddison, Philippe Coutinho, Dejan Kulusevski and Wilfried Zaha are all gaining momentum within the FPL circle. Their defence will rightly be completely avoided, although an interesting differential forward could be Rodrigo (£6.3m). The Spaniard has scored in three of Leeds’ last four matches.

Their very attractive double-double has one setback – it’d require picking Everton players. Their top FPL scorer is still lower than all other 19 clubs, although that man – Richarlison (£7.5m) – is probably their best asset, especially with injury woes for Dominic Calvert-Lewin (£7.7m). Given the lack of appealing forwards, it may be taking a punt on this differential with four games over two Gameweeks.

In fact, cheap midfielder Anthony Gordon (£4.6m) is probably the best way to get Everton coverage. He has created the most chances in their side over the last six matches and has scored four goals this season.

The infamous Wout Weghorst (£6.4m) immediately comes to mind. Two goals from 14 league outings, yet still in around 20% of FPL teams because Burnley always seems to be within two or three rounds of another Double Gameweek. Because the Clarets have momentum and some nice fixtures, this will likely keep Weghorst around.

Further back, their defence has kept eight clean sheets and Connor Roberts‘ (£4.4m) goal on Thursday night may have secured his place back in the side. Nick Pope (£5.4m) is a good goalkeeper but too expensive.

Beat Burnley and Everton at home, then perhaps Watford have a glimmer of hope. Ben Foster (£4.1m) is already one of the most-selected shot stoppers but mostly for his price rather than clean sheet potential.

Just when Cucho Hernandez (£5.0m) looked to be the ideal cheap forward, he picked up a hamstring injury. Whilst Emmanuel Dennis (£5.8m) is probably safely back in the line-up, there remains uncertainty over Josh King‘s (£5.6m) place.

The third most-bought player of Gameweek 34 was Norwich forward Teemu Pukki (£6.0m), due to many Wildcards were activated. Such managers noticed his four goals from the previous six matches and his place as the fifth-best FPL forward over this campaign.

To summarise, it definitely isn’t essential to have any of these FPL players. Foster may become a playing goalkeeper for managers in Double Gameweek 36 but the only viable defensive option is one from Burnley.

Raphinha brings goals from midfield, with forwards Weghorst, Pukki, Dennis and Richarlison offering potential. Although Anthony Gordon may not be worth a purchase, current owners are well-advised to keep the young midfielder.