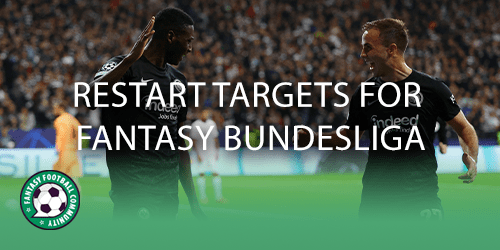 With German football returning to our screens, we bring in regular contributor and fantasy expert @FPLGunnersaurus (Jay) to provide some of the best restart targets for Fantasy Bundesliga, including goalkeepers, defenders, midfielders and attackers.

Looking into some of the best restart targets for Fantasy Bundesliga could be beneficial to other managers. After a long winter break, Bundesliga mangers will be looking to plan for the period ahead so checking out some of the best assets in the game moving forward could help with that.

Keep an eye on the goalkeeping situation at Bayern over the coming weeks will be key. Club number one Manuel Neuer broke his leg on holiday after Germany’s World Cup group stage exit. Normally this would pave the way for Ulreich to come straight in, however it appears Bayern are actively exploring options during the winter transfer window to replace him. If nobody comes in then Ulreich at 3.2m should be a shoe-in in most squads for the rest of the season.

The Polish shot-stopper sits joint fourth in the Fantasy Bundesliga goalkeeping scoring charts, despite having missed five games with injury. Buoyed by a huge 19 point haul in Matchday 6, Gikiewicz has racked up a phenomenal 69 points for saved shots alone.

Augsburg have some really tough games coming up against Borussia Dortmund (away), Borussia Mönchengladbach (home), Sport-Club Freiburg (away) and Bayer 04 Leverkusen (home) but those ties scream out save point hauls, right?

Personally I still can’t believe that 50% of Fantasy Bundesliga managers don’t own the highest scoring defender in the game! Arguably the best budget gem in recent history, Weiser has the potential, and explosive potential at that, to increase his total points tally with some fairly decent fixtures coming up. Bremen face FC Köln (away), FC Union Berlin (home), VfL Wolfsburg (home) and VfB Stuttgart (away).

Suggesting targeting the top two scoring defenders in Fantasy Bundesliga may seem like advice anyone could give, but you REALLY should owning them. Only seven points behind Weiser overall with 133, Bensebaini and Gladbach have some incredible fixtures coming up as they aim to get into the top four.

If you take a look at their fixtures, this nice run lasts all of the way up to and including Matchday 22, which also sees Gladbach in four standalone ties for that added star player flexibility.

Leverkusen’s midfield dynamo is back after a lengthy injury having started twice and come off the bench once during some mid-season friendlies. It’ll certainly be interesting to see how boss Xabi Alonso manages his gametime. But should he start playing regularly, then Wirtz instantly becomes a must have asset again.

With Vfl Bochum 1848 (home) coming up in Matchday 17, we may see Wirtz doing what he does best in Fantasy Bundesliga and that’s racking up big double-digit hauls.

Perhaps going under the radar is Szoboszlai. Having fully established himself in Marco Rose’s starting 11, he is one of the Bundesliga’s in-form players. The Hungarian has hit double digit returns in each of his last six games. After a tough first game back against FC Bayern München his Leipzig side face FC Schalke 04 (away) and VfB Stuttgart (home) – a lock in for my squad on those matchdays.

Dortmund’s promising 18 year old only featured for a single minute during Germany’s disastrous World Cup campaign, despite a string of very impressive performances for his club leading up to it. With FC Augsburg (home) and FSV Mainz 05 (away) in Dortmund’s next two games, expect Moukoko to show why he should’ve featured more for his national team.

Muani showed what he can do with World Cup runners-up France, netting the crucial second goal in their semi-final victory. With bottom club FC Schalke 04 (home) next it doesn’t get much better for a first game back. If you’re being brave and not owning a FC Bayern München forward for the first Matchday back (like me) then Muani is likely to be your first star forward of the Matchday.

You can stay up to date with all of our latest Fantasy Bundesliga articles right here.