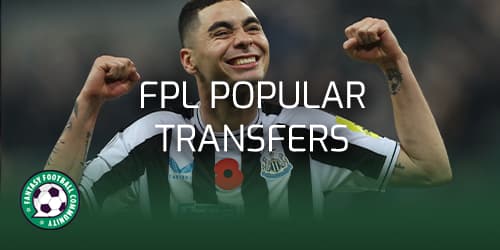 The Unlimited Transfer window is still open. As a result FPL managers are free to make as many transfers as they want too. Here we assess the transfer market and the most popular FPL transfers. FPL managers can also check who is popular and who isn’t through the Official FPL website.

On the back of his brace against Man City in Gameweek 16 Ivan Toney (£7.4m) remains the most popular transfer in so far. The forward has over 530,000 new managers and Toney is now having a break as he was not part of England’s World Cup squad.

The in-form Newcastle midfielder Miguel Almiron (£5.8m) is the second most popular transfer in this week. Almiron has over 345,000 new managers, on the back of yet an assist in Gameweek 16.

Darwin Nunez (£9.0m) backed up his assist in Gameweek 15, with two goals in Gameweek 16. As a result he has been bought by over 302,000 managers. Nunez has now returned to Liverpool after Uruguay’s exit from the World Cup. With news of Luis Dias’ injury, as well as that Diogo Jota won’t return to action until later in the new year Nunez looks to be increasingly important for Liverpool.

England captain Harry Kane (£11.6m) has been popular whilst away at the World Cup. he has over 257,000 new managers. Kane is now on a short break after England’s exit from the World Cup.

Danny Ward (£4.1m) recorded his first double-figure haul this season thanks to the maximum three bonus in Gameweek 16. Over the last eight Gameweeks his tally of 52 points is the highest among goalkeepers. He has over 246,000 new managers so far. Ward has now returned to Leicester after Wales’ exit from the World Cup.

Gabriel Jesus (£8.0m) now hasn’t scored a goal since Gameweek 9. FPL managers therefore seem to be using the transfer window to sell the Arsenal front man. Over 373,000 managers had sold Jesus ahead of his injury at the World Cup. Jesus has now returned from the World Cup having sustained a knee injury whilst away with Brazil. The forward has had knee surgery and looks set to be out for a while. He has now been sold by 560,000 managers.

Aleksandar Mitrovic (£6.8m) was ruled out of Gameweek 16 through injury. Mitrovic also missed Gameweek 15 with a foot/ankle injury. He returned from injury during the World Cup for Serbia. The forward is the second most popular transfer out with over 254,000 managers selling him so far.

Wilfried Zaha (£7.5m) missed a penalty in Gameweek 16. On the back of this he has been sold by over 235,000 managers. This is despite Palace having a nice run of fixtures after the World Cup.

Man City defender Joao Cancelo (£7.4m) is also a popular transfer out for managers. Over 209,000 managers have sold the defender. This could be because managers are looking to move money out of defence to invest in the attacking spots.

Two one point appearances have meant that Callum Wilson (£7.4m) is being sold by FPL managers. The forward is travelling to the World Cup with England. Over 197,000 managers have sold the striker.