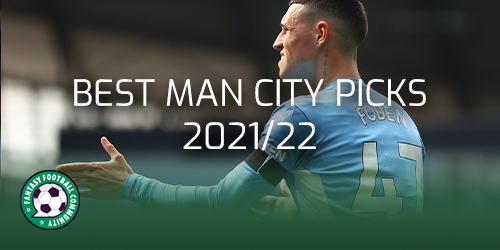 With the Premier League season over, it’s time to assess each of the 20 teams one-by-one. So here is Man City’s FPL review of 2021/22.

Winning the league for the fourth time in five seasons – retaining their crown – ends a good season for Man City. Yet some still may be disappointed at just one trophy, having once again exited the Champions League at the semi-final stage. They couldn’t even rely on the League Cup this time – a competition they’d won in the previous four campaigns.

Jack Grealish arrived in the summer for a British transfer record of £100m, after saying goodbye to all-time top scorer Sergio Aguero. They didn’t even buy a replacement for the Argentine but still ended up scoring an outstanding 99 league goals.

An opening day defeat at Spurs was quickly followed by two 5-0 home victories. These were later joined by a 7-0 (v Leeds), a 5-0 (v Newcastle) and five other four-goal wins.

Curiously, despite winning 29 of 38 matches, they couldn’t win either game against Tottenham, Liverpool, Southampton and Crystal Palace.

However, on the final day, they eventually pulled themselves to success after shockingly going 2-0 down to Aston Villa. A dramatic five minutes and 36 seconds brought a trio of City goals – two by substitute Ilkay Gundogan – and another league success for Pep Guardiola.

Just as important to their title win is their supreme defence. Having collected 21 clean sheets, their back line was by far the league’s best for conceding few shots and expected goals.

A dozen players finishing on at least 120 points is pretty special. As is having a defener (Joao Cancelo) finish 12th throughout the whole league for goal attempts.

There was even a Bernardo Silva run of form that brought five goals in five matches. Overall, the Portuguese wizard ranks sixth in the league for penalty area touches.

Joao Cancelo topped 200 points and has the most shots and assists. When accumulating attacking returns and clean sheets, only three players delivered more – Mo Salah, Son Heung-min and Trent Alexander-Arnold. Not bad for a player that started at just £6.0m, before rising to £7.2m in the season’s joint-biggest price rise.

Amongst defenders, his 81 shots are way ahead of the next best Alexander-Arnold (51). His 108 penalty area touches is also the best in his position, although it’s strange that only one goal arrived.

And the second name is Kevin De Bruyne. Slapped with a surprisingly high £12.0m price tag at the start, it took a long time for his season to get going. But once it did, wow. The latest 20 matches included 13 goals, eight assists and five double-digit hauls, peaking with an incredible four goals against Wolves in Gameweek 36.

It looks like the Belgian has been instructed to be more of a scorer than an assister. In his sixth campaign of playing at least 50% of minutes, the goals are much higher and the assists much lower.

Although Grealish springs to mind, being a very expensive squad player with just a trio of goals and assists, it feels like Phil Foden underachieved in terms of output.

After his 18 points at Brighton in Gameweek 9, Foden only notched six goals and four assists until the end. Being deployed as a false-nine while listed in the game as a midfielder, FPL managers were waiting for Foden to run riot but it just never happened. He ends as Man City’s fourth-best midfield option, with Riyad Mahrez just two points behind on far fewer minutes.

Looking ahead to next season

Having struggled their way to 99 goals without a recognised striker, Guardiola has addressed this ‘weakness’ by buying Erling Haaland from Borussia Dortmund. Already, the summer’s biggest question amongst an excited FPL community is regarding Haaland’s price. Opponents will be petrified of what’s to come.

Another topic regards the position of Foden – will he be reclassified as a forward? Maybe the Haaland transfer changes this situation. Meanwhile, De Bruyne may stay at £12.0m but there should be rises for Cancelo and Aymeric Laporte, with a drop for Raheem Sterling.

Check out our other season FPL review articles, as well as regular summer round-ups of FPL news and gossip.