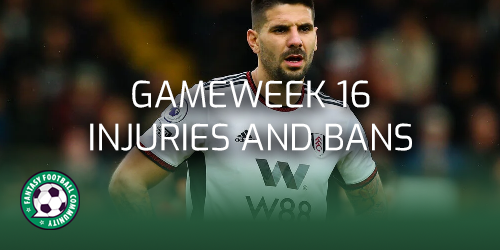 Being able to navigate around unavailable players is key to FPL success. Together with some useful Fantasy Football Scout information, here is the current list of injuries and bans heading into Gameweek 16.

THE NOTABLE INJURIES AND BANS OF GAMEWEEK 16

Chris Mepham (suspension) – 5th yellow card of the season, out for Gameweek 16.

Dominic Calvert-Lewin (hamstring) – Will have a scan to determine the extent of this problem.

Harrison Reed (suspension) – 5th yellow card of the season, out for Gameweek 16.

Kenny Tete (suspension) – 5th yellow card of the season, out for Gameweek 16.

Luis Diaz (knee) – The Colombian will be out until beyond the World Cup.

Kyle Walker (abdominal) – In a race to make the World Cup.

Diogo Dalot (suspension) – 5th yellow card of the season, out for Gameweek 16.

Callum Wilson (illness) – Taken off at half-time during Gameweek 15.