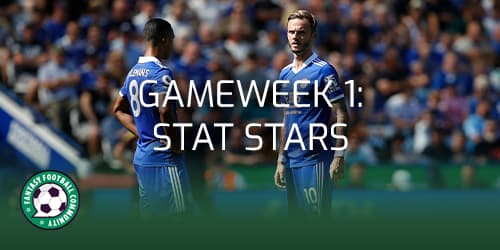 Picking out some stat stars from gameweek 1. Using the Fantasy Football Scout members area we take a look at some of the players that topped the key stats from the gameweek 1. Stats will include underlying data points like shots on target, chances created and other important stats to give us an indication of which players did well.

Looking at underlying stats every gameweek can indicate which players did well. Even if the players who topped the stats didn’t return any points. This can be a good sign that the players were close. FPL managers are always on the lookout for assets that could potentially return in the future. This could help with that.

£6m defender Reece James put in more crosses than any other player in gameweek 1 with 17. His performance statistically was only improved when combining the three chances he did create, this put James joint top amongst defenders for that particular stat too.

The Chelsea defender managed to convert his performance into points with claiming a clean sheet and bonus points this weekend. This saw the wing-back hit a total of seven points.

At the time of writing £6m midfielder Jack Harrison is only 1% owned in the game. The Leeds attacker topped the chances created chart amongst all players with six, one clear of playmaker and Leicester midfielder James Maddison.

Harrison also created two big chances which was more than any other player in the League. He was rewarded for his performance with an assist and two bonus points. This meant Harrison finished the gameweek on six points.

Newcastle midfielders Almiron and Saint Maximin both came joint first for touches in the opposition box this weekend. Both completed 12 touches each in the Nottingham Forest box. Unfortunately both failed to convert that into FPL points as they both only came away with three points each.

£8m midfielder James Maddison came away with an impressive six goal attempts against Brentford in gameweek 1. The Leicester man came ahead of every other player in the league for that particular stat.

Maddison also came close for chances created. Only Jack Harrison managed more than him. Maddison came away with an assist making it three back to back returns against Brentford although it could have been more.

New Man City striker was well owned going into gameweek 1 and that will only increase. Against West Ham the £11.6m forward topped two different key data points for shots in the box with five and big chances total with four.

After taking a price increase already Haaland owners will be hoping for even more than the brace he converted against the hammers. Taking away all bonus points and hitting a 13 point haul it could be time for non-owners to bring him in.

Not sure how gameweek 2 could go? Take a look at our What to expect from gameweek 2 article here.