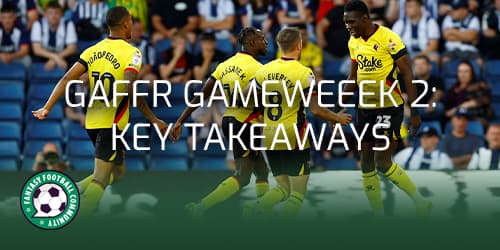 Here we go through the key takeaways in every Championship game in gameweek 2. We take a look at key events including goals, assists, bonus points clean sheets and more from a GAFFR point of view.

With gameweek 2 now over GAFFR managers could benefit from knowing the key events from the matches gone. This information could then help those all important GAFFR decisions as we edge closer to the gameweek 3 deadline.

In a tightly contested score line home side Birmingham took the spoils in gameweek 2. No sides defensive assets managed to bring in more than four points in GAFFR this week. This meant it was all about the attackers. One of the standout GAFFR performances came from £6m forward Hogan who returned 10 points from his goal and bonus points.

Joining Hogan was team mates and midfielders £6m Bacuna and £7m Placheta. Both returned 10 points each for their goal, assists and bonus points. £8m Huddersfield midfielder Thomas brought in seven points for his assist and bonus. In addition the Huddersfield standout performance came from £6.5m forward Ward for his goal with bonus points.

Norwich were held by Wigan in a 1-1 draw that saw the league favourites drop more points. Key injury victim and £6m defender Giannoulis could be out for a while. Owners will be keeping a close eye out for news.

Wigan midfielder £5.5m Mclean took a nine point return with his goal and bonus whilst £6m forward Keane came away with eight points for his assist and bonus.

Many fans expected goals and that is what we got from both sides in gameweek 2. In another thrilling game from Bristol City we saw them lose 3-2 against newly promoted side Sunderland. No defender managed to return more than four points in GAFFR.

£8.5m forward and heavily owned Weimann came out on top again for Bristol City. He returned a cool 11 points for his goal, assist and bonus points. Team mate and £7m fellow forward Martin also returned with his goal resulting in a seven point return.

A highly anticipated matchup resulted in a 1-1 draw. £6m Josh Brownhill topped the points for Burnley with his 11 points from his goal and bonus. £8.5m striker Barnes also stepped up with his assist to give him a six point return.

For Luton there was returns at the back. £4.5m budget defender Potts took away a double digit return of 11 points. His return came from a goal, a first half clean sheet and bonus points. Fellow defender and £5.5m Bell also took home six points for his clean sheet and performance bonus.

£5.5 midfielder Freeman came away with a cool nine points for his assist and bonus points.

Preston and Hull broke even in a goal-less draw on the weekend. Most of the points came from defence. Preston defenders £4.5m Lindsay and Storey both managed six points each for their clean sheets. This tally was also matched by £5.5m goalkeeper Woodman.

It was £5m defender Brady that stood out for Preston. His nine points came from his clean sheet and bonus points. £5m goalkeeper Ingram and £5m defender Greaves took the spoils with eight points each from there clean sheets and performance bonus.

There was plenty of action here in gameweek 2 Home side QPR stunned Middlesbrough in the first half and won the game 3-2. This came to a huge surprise to GAFFR managers. QPR striker and £7m forward Dykes took the biggest return away, 11 points from his goal and bonus.

Favourite last season £8.5m Willock also came away with a nice return. He brought in seven points for his goal. Midfielders £8m Chair and £4.5m Field both hit an impressive nine points for their assists and bonus points.

In a game that ended 2-1 to home side Reading surprisingly there was no huge spread of points here. £5.5m midfielder Ejaria created an assist and with bonus hit nine points. £6m forward Long took eight points for his penalty scored.

Sheffield United came back after their loss against Watford last gameweek. A solid 2-0 saw them sink Millwall. There was plenty of points at the back for Sheffield United. There entire backline managed to hit above four points.

The only player to hit more than three points for Millwall was goalkeeper and £6.5m Bialkowski. He managed to shine with his penalty save, clean sheet points and performance bonus.

The home side eased a 2-0 victory against Blackpool in gameweek 2. Stoke defensive assets really came through this week. Of the three players that hit double digits two were defenders. £5m Clarke managed 13 points for his goal, clean sheet points and performance bonus.

It was favourite Tymon who took the chunk of points. The £5.5m defender took away a massive 16 points for his assists, clean sheets and bonus points. Many GAFFR managers could have their eyes on him for the weeks ahead.

£7.5m striker Brown hit 10 points for his goal and bonus. Blackpool collectively came short in terms of points. Just 19 points amongst their entire team in GAFFR meant no player hit above three points.

In a result many fans would have been surprised by Blackburn swept the Swans aside with a 3-0 away win. Swansea came even shorter on points than Blackpool hitting only 15 points. No Swansea player hit more than three points this gameweek.

Premium striker and GAFFR star £10m Brereton hit another return with his 10 points. Those points consisted of his goal and bonus points. Clean sheet points for everyone at the back meant the Blackburn defensive assets were successful.

£5.6m midfielder Hedges hauled due to his assists and bonus points reflecting great value. His return hit the dizzy heights of 15 points. Midfielders £5.5m Travis and £6m Szmodics both had a great week hitting 11 and eights for their goals.

One of the biggest clashes of the week for many. The play-off favourites came to a stand-still after their 1-1 draw meant both took a well fought point away. Baggies goalkeeper and £6m Button hit nine points after his penalty save.

£7.5m midfielder Diangana returned nine points for his assist and bonus points. Continuing the attacking points for West Brom was £10m striker Ahearne-Grant who matched Diangana’s tally with his goal and bonus.

Standout options £11m midfielder Sarr had a successful match. His goal and bonus saw him take away 10 points whilst £5.5m defender Cathcart created the assist which saw him hit seven points.

A reminder that if you’re a GAFFR manager you can stay up to date with all of our Championship fantasy content right here.