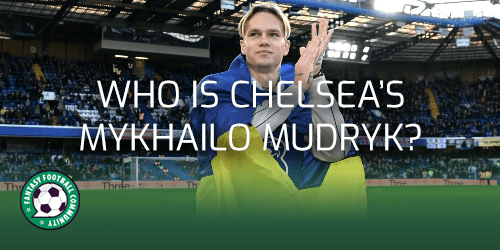 Chelsea poached Mykhailo Mudryk from under the noses of Arsenal last weekend, signing the 22-year-old in an £88m deal from Shakhtar Donetsk.

He caught the eye in the Champions League and arrives with ten goals and nine assists this season.

The Ukrainian winger was paraded on the pitch at half-time during the Blues’ 1-0 win over Crystal Palace on Sunday, after signing a whopping eight-and-a-half-year deal.

Mudryk has been priced as a £7.0m FPL midfielder and could debut during Chelsea’s trip to Liverpool in Gameweek 21.

The next step was a loan move to Arsenal Kyiv, before returning to Shakhtar and making three 2019/20 Premier Liga appearances.

Another loan followed, to Desna Chernigiv, where he gained vital experience. It helped establish himself upon his return to his parent club, who’d just appointed current Brighton boss Roberto De Zerbi.

Mudryk scored his first goal in October 2021 and featured in every UCL group game that season, including matches against Real Madrid and Inter Milan. However, domestic action was halted due to Russia’s invasion of Ukraine, leaving him with only 11 league appearances in 2021/22.

The current campaign sees him boast seven goals and six assists in 12 league matches. Alongside this is five goal involvements in six UCL outings, an impressive showing given that Shakhtar were group outsiders.

CHECK OUT THE FULL ARTICLE, WHICH LOOKS AT MUDRYK’S PLAYING STYLE AND FPL PROSPECTS

Meanwhile, we have an updated page for all Premier League activity in this January transfer window.