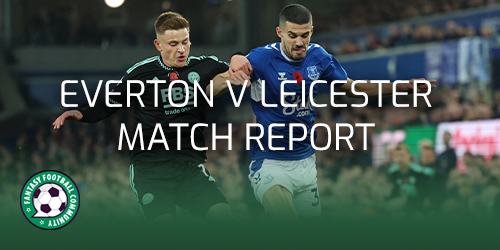 Taking a look at line-ups, goals, assists, clean sheets and anything else we could highlight that could have implications for FPL managers. We cover the Everton v Leicester match report. Covering eye test and key moments through-out the match with the help of the Fantasy Football Scout members area.

Overviewing the Everton v Leicester match can be helpful in identifying key moments in the match. This can then give FPL managers a good insight into which players and teams looked good, key injuries, fitness and even more to help us make decisions in FPL.

Midfielder Anthony Gordon (£5.4m) fails to start the match after returning in just two of his last 10 matches. Striker Dominic Calvert-Lewin’s (£7.9m) continues to cement his place in the team after returning from his injury.

Belgian defender Timothy Castagne (£4.6m) will be hoping to return to his great FPL run. Castagne hit five consecutive returns in a row between Gameweek 9 and Gameweek 13. Midfielder James Maddison (£8.2m) could be looking to impress with the World Cup coming up.

Make sure to stay up to date with all of our great FPL articles right here.