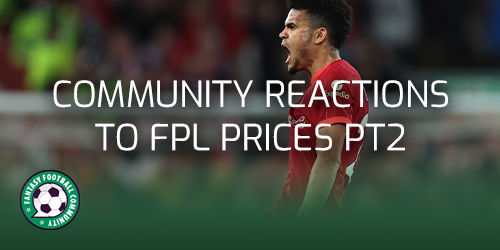 Following on from the five clubs who released prices on Friday a further five teams released prices on Saturday. The announcements from Liverpool, Manchester United, Wolves, Aston Villa and Fulham mean we now have 11 prices from half of the teams in the league. We take a look at the community reactions to the prices.

The FPL community was immediately full of conversations about must haves, bargains and what that might mean for other assets.

Official FPL have started a number of conversations on Social Media today. They asked whether managers were tempted by Watkins.

Great for the budget!

Liverpool fan Lee from FPL Family was delighted with Alexander-Arnold and Diaz’ price tags. He suggested there will be many varied teams at the start of the season with lots of great options.

Andy voiced that in his viewAlexander-Arnold and Salah are easy picks and that the conversation at Liverpool is how to triple up.

Whilst Geoff and Lateriser discussed how many great options there are at Liverpool. Both experts believe there to be at least five good picks from the red half of Merseyside. Of course, FPL managers will only be able to own a maximum of three Liverpool players as per the FPL rules.

FPLHints made some predictions about effective ownership. He suggests that Salah and Haaland will be the most popular picks in the game at the stat of the new season.

On the Fantasy Football Scout Community Twitter they discussed Rashford and Sancho. Both players had a difficult season in 2021/22 and have taken a price drop ahead of the new season.

Elsewhere the community continued to discuss when we might get the rest of the team prices and when the game might be live.

Many managers have been putting together draft teams as a result of the price releases, and Ragaboly has been updating the LiveFPL team planner with the official prices. Whilst waiting for the official game to launch this is a great way to see how budget can be spread, and which formations can be successfully deployed.

FPL Focal was delighted at what team he could create for 100m.

To see our initial reaction to the FPL price releases click here.