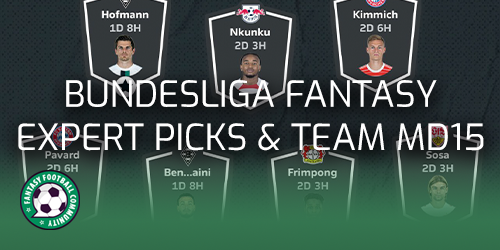 With a new round ahead, we look at Bundesliga Fantasy Matchday 15 expert picks and team. @FPLGunnersaurus (Jay) joins us to give his three top picks for the Matchday ahead. In addition, he also shares his squad going into the new round with his general thoughts.

Twitter is full of the most experienced fantasy football players around. Those managers can be some of the best people to look to when trying to gain clarity when making their own decisions within their teams. Seeing Matchday 15 expert picks and team can help for the round ahead.

What’s this? A differential player who’ll line up in Bayern’s front line against bottom of the table Schalke? Gnabry, only 5% owned at the time of writing this, has hit his stride at the right time. Nailed in the Bayern starting line-up after injuries to Mané and Müller, the German international is showing national coach Hansi Flick exactly why he deserves to be on Germany’s plane to Qatar.

With five goals and two assists in his last five games, Gnabry is on fire. Coming off the back of a huge 28-point fantasy haul against Werder Bremen, imagine what he can do against fellow promoted side Schalke. We’ve seen Bayern score five goals once, six goals three times and even seven goals once, can they go one better here? It certainly wouldn’t come as a surprise! If they do, expect Gnabry to also return BIG!

There are three certainties in life, death, taxes and Nkunku returning big week in week out in Bundesliga Fantasy. If you’re not already part of his 79% ownership, what are you doing? With Lewandowski and Haaland gone, Nkunku is the must have essential fantasy asset. Included in France’s World Cup squad Nkunku will be looking to sign off 2022 in the Bundesliga with one final bang. Top scorer in Bundesliga Fantasy with 170 points and top scorer in the Bundesliga with 12 goals, Nkunku is surely going to increase his lead at the top of both of these charts away to Werder Bremen on Saturday afternoon.

Off the back of a thumping themselves to the juggernaut that is Bayern Munich, Bremen may find themselves looking at another defeat against an in-form Leipzig team who have won three on the bounce. Nkunku is inevitable.

To the BayArena and Leverkusen’s standout player this season, their young Dutch full-back Jeremie Frimpong. Despite Leverkusen’s shaky start Frimpong is having a stellar season so far, scoring five times (the club’s joint top scorer) and supplying two assists.

This form has translated into some big fantasy returns this season with 24 points, 30 points, 14 points, 15 points and 13 points. Four of those returns coming in the club’s only four wins this season. Three of those double-digit returns have also come in Leverkusen’s last three home games, and that’s where Frimpong finds himself once more on Saturday afternoon against Stuttgart. Leverkusen are third for expected goals at home with a 1.9xG and with Frimpong sometimes playing like a right winger, he should pick up some attacking returns on Matchday 15. Will he haul for you?

Get yourself prepared for each Matchday in Bundesliga Fantasy with our articles here.