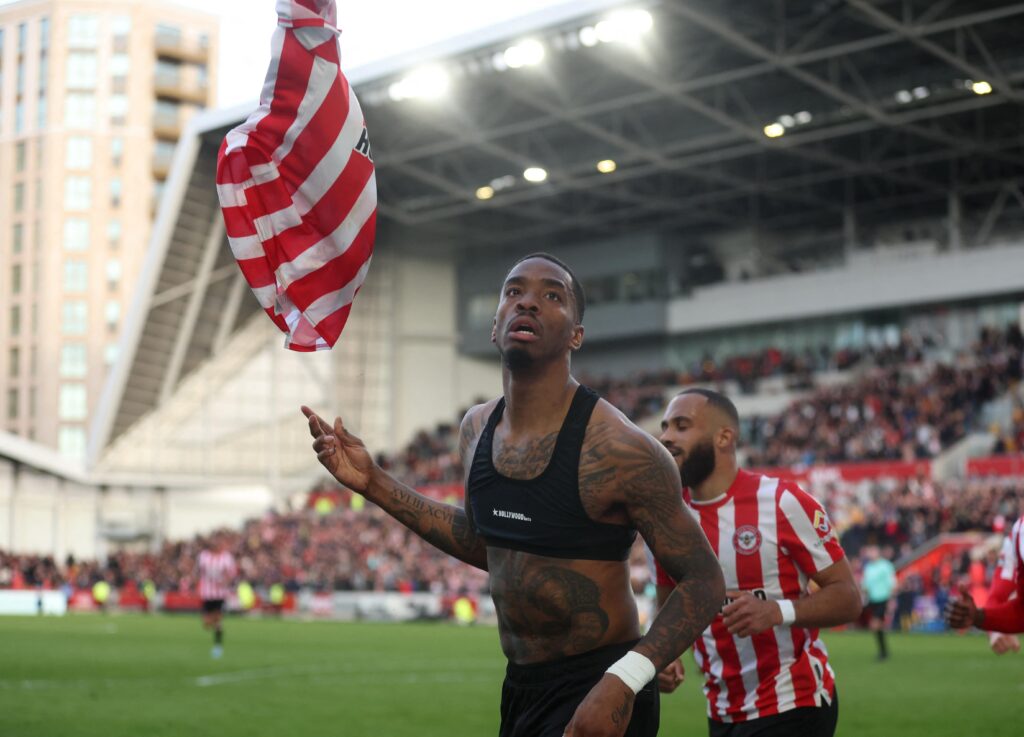 Throughout the season the wingbacks and the midfielders have been prioritised by FPL managers over their forward counterparts. However, in recent weeks we have seen a resurgence in the form of some of the forwards. Ahead of Gameweek 30 Tottenham’s Harry Kane has returned in four of Spurs’ last five Premier League games, including three double digit hauls.

Likewise, Brentford’s Ivan Toney has returned five goals in the last two Gameweeks and Arsenal’s Alexandre Lacazette has returned in all of Arsenal’s last five fixtures.

Since Gameweek 18 Kane has registered 79 FPL points for his owners, more than any other forward. He is first for influence in the ICT index for forwards as well as being second for threat and fifth for creativity.

In the last six Gameweeks Kane has had 24 attempts on goal, more than any other forward in the game. His eight big chances is also a league leading total amongst forwards. In the same period opponents West Ham have conceded 82 shots, 19 of those on target.

In the absence of Mo Salah, Kane is likely to be the most captained player in the game in Gameweek 30. Most FPL managers playing their Free Hit chip or Wildcard this weekend will prioritise owning Kane. However, it is a more difficult decision as to who to own alongside the Spurs number 10.

The arrival of Christian Eriksen into the starting line up for the Brentford team has seen Ivan Toney score five goals in the last two Gameweeks.

Toney was a popular pick among FPL managers at the start of the season. However, he failed to returned at all between Gameweeks 14 and Brentford’s first match of Gameweek 22. In part that was due to injury, as well as a change in formation and Brentford’s style of play in the absence of David Raya. Toney then returned back-to-back returns before missing another three matches.

Had Toney been consistant in his appearances this season his ownership would likely be much higher than the current 12.2%.

Before Lacazette’s penalty in Gameweek 29 he had failed to score since December. However, he had still returned in every game since Gameweek 24. Only Leeds’ Rodrigo has created more chances amongst forwards than Lacazette’s nine in the last six Gameweeks. Lacazette’s goal attempts in the same period stands at 21, only Kane and Cristiano Ronaldo have had more.

Lacazette faces an Aston Villa side who have conceded nine goals in their last five Premier League matches at Villa Park.

For managers that invest in the Arsenal forward for Gameweek 30 he remains one of the best FPL forwards in the game beyond this week. Arsenal have a nice run of fixtures between now and the end of the season.

Jimenez has been a difficult own for FPL managers at points over the course of the season. He has returned in nine Gameweeks this season, however he has only managed one double digit haul. With teammate Hwang going off injured in Gameweek 29 Jimenez could yet again play on his own upfront which benefits his attacking potential.

Jimenez has had 15 goal attempts in the last six Gameweeks, 11 of those coming from inside the box. Six of the matches where Jimenez has returned this season have been at home and this bodes well for Jimenez’s potential in Gameweek 30. Jimenez also registered an assist in the reverse of this fixture back in Gameweek 9.

Harry Kane is the best FPL forward for Gameweek 30. However, Lacazette, Toney and Jimenez all offer decent options for the Gameweek. For FPL managers looking to invest owning two of these four forwards for Gameweek 30, Kane and one other, seems a good strategy.

Kane and Toney are both in the top transfers ahead of Gameweek 30 FPL247 reports.

FPL Mate asked Twitter why Lacazette isn’t being talked about more in the FPL community.

Want more details on what to expect in the Gameweek 30 fixtures? We’ve assessed the fixtures and what the community are expecting to happen.