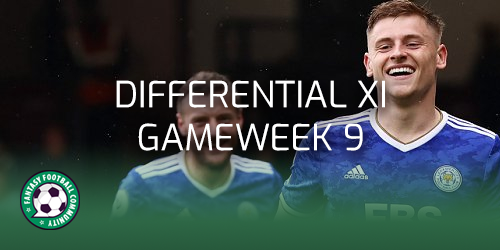 In this weekly series, Will from Fantasy Football 92 explores the low ownership differential options that could be the hidden gems to help you climb up those world rankings. He is his best differential XI for Gameweek 9.

Here are the differential options Will likes the look of for Gameweek 9.

Is it a viable tactic to start targeting defenders and goalkeepers who face Wolves? Bruno Lage’s side creates very little going forward, meaning it could be a quiet day for Lukasz Fabianski and co. I fancy them for a clean sheet despite their struggles so far this season.

Leicester have also had a miserable time so far but it’s well documented that their fixtures are about to take a positive turn. A brave manager would back the Foxes’ defence in their current predicament but Timothy Castagne should offer some value going forward in the East Midlands derby against Nottingham Forest.

Joel Matip continues to represent a cheaper avenue into Liverpool’s defence, although an improvement from Jurgen Klopp’s side is needed before managers invest heavily in it once more. Having said that, Kostas Tsimikas should also start against Brighton, with Andy Robertson seemingly injured.

Meanwhile, Kenny Tete continues to fly somewhat under the radar in FPL. The full-back is still only 0.5%-owned ahead of a nice fixture run, despite assisting three times in the first seven gameweeks.

It will come for Jarrod Bowen. It has to. He was incredibly unlucky not to return against Everton in Gameweek 7, will be well-rested and also determined to show that last season was no fluke.

Elsewhere, Leeds pairing Brenden Aaronson and Luis Sinisterra are two to watch against an Aston Villa side that travels poorly. The latter just netted three times for Colombia on international duty and has scored six in his last six outings overall.

Harvey Barnes has barely got going this season – like his Leicester side – but may be one to gamble on ahead of this extremely kind run of fixtures. A hot performance against a woeful Forest defence could soon see his price quickly skyrocket. Demarai Gray rounds off the midfield differential list after a dazzling display against West Ham in Gameweek 8 that somehow didn’t bring a goal or assist.

For Jamie Vardy, see Castagne and Barnes! It just hasn’t happened for the 35-year-old this season, due to both the failures of his own side and a lack of opportunities. Leicester’s talisman has lost his place over the last couple of games to Patson Daka but I’d be surprised if he isn’t recalled to the starting line-up this week in a massive game for The Foxes.

Vardy is often a man for the big occasion and their meeting with Forest is exactly that.

If you’re active on Twitter, you’ll also have seen that Dominic Solanke has attracted attention over the international break. Despite an on and off start to the campaign, he will still be the Cherries’ talisman for an enticing fixture run. If anyone is going to lead a more hopeful-looking Bournemouth side unlikely survival, it will be Big Dom!