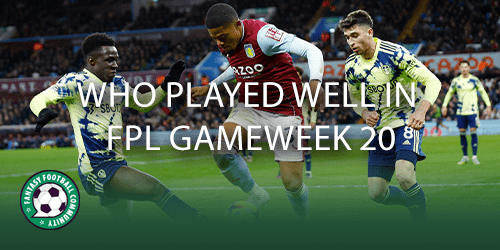 We take a look at who played well in FPL Gameweek 20. With a focus on the matches played so far, we highlight some of the standout performances of the current round, whether they returned in Fantasy Premier League or not.

Underlying stats will always be very useful for FPL managers in their chase for success. However, looking at who played well in FPL Gameweek 20 could be a huge factor when looking at potential FPL assets to bring into our fantasy teams moving forward.

It was a good offensive performance by Aston Villa in Gameweek 20. Although they won 2-1, that lead could have been much bigger. Exciting and open, the game was a great watch but there was players that stood out.

One of the players to catch the eye was Leon Bailey (£4.5m). The midfielder looked like Aston Villa’s biggest threat on the counter attack. Bailey was quick and sharp and caused the Leeds backline some huge problems. His left foot was better than it has been for most of the season and Bailey was rewarded for his performance with a goal, assist, two bonus and a whopping 12-point return in FPL.

Leeds worked really hard against Aston Villa and created some great chances. However their failure to convert those chances dealt a fatal blow as they lost their match. It wasn’t all bad for Leeds though. One player did shine.

Wilfried Gnonto (£5m) has perked the interest of Fantasy Football managers as of late. The striker bagged nine points in his most recent match against West Ham. That form carried into the game against Aston Villa. Gnonto was by far the best player on the pitch on Friday night. Exciting, tricky, bullish, pacey, his performance was brilliant. Unfortunately he failed to covert his performance into FPL points.

Manchester United continued their fantastic run this week. Their 2-1 win over Manchester City meant they secured their seventh consecutive win on the bounce. Its was a fantastic overall performance from the red half of Manchester but one player did take the spotlight.

Prior to Gameweek 20, Marcus Rashford (£7.1m) bagged six goals in as many on the bounce. The midfielders fantastic form translated into his match against Manchester City. Rashford’s burst of pace looked un-defendable at times and it was clear that any threat from the Reds would probably come from him. He placed himself into three different positions to score during the game. The man in-form finished one of his chances and ended the match on a cool 10 points in FPL.

Brighton sustained their great run of form recently against Liverpool. The victory came as a surprise to many fans due to the convincing 3-0 score line. Brighton had plenty of fantastic performances but Solly March (£5m) was unplayable.

The midfielder was relentless in every department, creative, clinical, penetrating, and caused huge problems to the Liverpool backline. March created four key passes, three shots on target, two goals and one assist. The Brighton man was rewarded with a massive 19-point haul due to his performance.

Did you miss the Manchester derby yesterday? Don’t worry, we have you covered with our match report here.