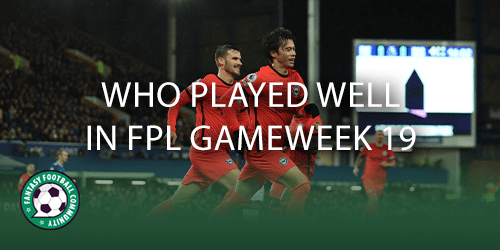 We take a look at who played well in FPL Gameweek 19. With a focus on the matches played so far, we highlight some of the standout performances of the current round, whether they returned in Fantasy Premier League or not.

Underlying stats will always be very useful for FPL managers in their chase for success. However, looking at who played well in FPL Gameweek 19 could be a huge factor when looking at potential FPL assets to bring into our fantasy teams moving forward.

Brentford shocked football fans this week with their convincing win over Liverpool in their 3-1 victory. They defended really well when needed but what really stood out was their sharpness in attack. The performance of the game came from forward Bryan Mbeumo (£5.8m).

Bryan Mbeumo created some fantastic chances and his delivery from corners was sublime. Although creatively great, Mbeumo was also quick to counter attack and his burst of pace created huge problems for Liverpool. The striker bagged a goal and an assist which meant he collected all bonus and hit a huge 12 points in FPL.

Manchester United’s recent performances have been very reflective of their players increasing form and reliability. One of their standout players is left back Luke Shaw (£5m). The defender has been fantastic this season and even more so since his return from the World Cup.

Although playing centrally in his previous match, Luke Shaw returned to his usual left back position for their match against Bournemouth. Shaw was brilliant. His creativity was on point and positionally, he was clever. In in-form defender created three key passes, scored and hit a whopping 15 points in FPL.

After a 4-2 defeat at the hands of Arsenal in Gameweek 18, Brighton needed to react. They did exactly that in their match against Everton, dismantling the Toffees in their 4-1 victory. One of the few players to catch the eye was Kaoru Mitoma (£4.9m).

The Japanese midfielder had a great run at the World Cup and that top form continued in his return to Brighton. Kaoru Mitoma was a breath of fresh air against Everton. Fit, sharp, and clinical, Mitoma looked like the most exciting player on the pitch. He got his reward with his goal and eight point return.

Although Everton were beaten this week, it’s very difficult to leave out the overall performance of their most dangerous player. Demarai Gray (£5.3m) scored a fantastic goal against Manchester City in Gameweek 18 which led to his team securing a point against one of the toughest opponent’s in the league.

Demarai Gray wasn’t just the best of a bad bunch against Brighton.His ability and motivation was unmatched by his teammates. His hunger and pace on the counter attack became Everton’s only real threat. Although he could not convert that in open play, he was composed enough to put away a penalty and finish with seven points in FPL.

What did the top 10k managers do this week in FPL? Check that out right here.