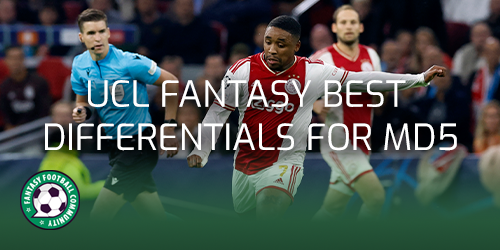 We look at the UCL Fantasy best differentials for Matchday 5. The new Champions League Fantasy round is coming quickly. Here we try and find some of the best lowly owned players within the game ahead of Matchday 5.

Finding the best differentials for Matchday 5 can be key to gaining rank early. For that reason, it’s really important to find some of those hidden gems within the game that most won’t select. This way we have an edge over our competition.

Benfica come into the Matchday 5 as one of the best form teams amongst Europe’s top clubs. The Portuguese side remain unbeaten in all competitions this season, an early indicator of how strong they are. This form was reflected in their two back-to-back matches against PSG where they drew both when many expected them to lose.

Juventus lay ahead for Benfica. The Italian giants have been in very poor away form this season. In fact, Juventus have lost or drawn in six of their seven away matches this season. This could mean targeting them a good idea.

Striker Goncalo Ramos (£9m) is 0% owned in UCL Fantasy. Although there does seem to be a lack of points from Ramos, domestically the Portuguese youngster has scored six goals and created one assist. This tallies up to seven goal contributions in his nine matches played.

Chelsea have improved hugely defensively since new manager Graham Potter took over. Actually, in the last six matches the Blues have managed to keep an impressive five clean sheets. The English side also use a wingback system. This means that a lot of their attacking play can come from the wingbacks.

With the injury to right wing back Reece James it could be beneficial to opt for the left wing back, Ben Chilwell (£5.5m). At just 2% owned the Chelsea man continues to fly under the radar of UCL Fantasy managers. Chilwell was one of the most dangerous defenders in the Premier League last season for expected goal involvement per 90 minutes. With two back-to-back seven-point returns in the Champions League in the last two Matchdays, it could be a good time to bring Chilwell in.

Inter have shown that they will not be swept aside by the likes of Barcelona and Bayern within their Champions’ League group. Although they lost to Bayern, Inter thrilled football fans with their huge 3-3 draw with Barcelona. Their strength can only be furthered when looking at their Matchday 5 oppoenents.

The Italian side play Plzen at home in the round ahead. Plzen, although dominant in their own league, have really struggled in their current UCL campaign. In fact. Plzen have conceded a whopping 16 goals in their first four Matchdays. That averages out at four goals conceded per match.

Lautaro Martinez (£8.4m) could be a great differential. The 2% owned forward and penalty taker has been a top form domestically. In the 11 matches he has played he has scored six and created two assists. The striker also managed to score and create an assist against Barcelona in Matchday 4.

Ajax may face Liverpool in Matchday 5, but they a face a team really struggling for away form. In their seven away matches, Liverpool have dropped points in six of them and only won once. Ajax will be looking to improve their Champions League form and after scoring 11 goals in their last two matches, the Dutch side have the wind in their sails to do it.

Midfielder Steven Bergwijn (£7.1m) could be a player to consider. The Dutch attacker has now banked seven goals and two assists domestically. This tallies up to nine attacking returns in 11 matches played. Bergwijn has also proved his worth in the Champions League this season. He scored in two out of the four Matchdays played, one against Rangers and one against Napoli in the previous round.

If you missed our top picks for Matchday 5 article you can catch up here.