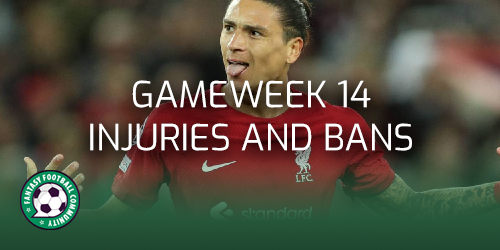 Being able to navigate around unavailable players is key to FPL success. Together with some useful Fantasy Football Scout information, here is the current list of injuries and bans heading into Gameweek 14.

THE NOTABLE INJURIES AND BANS OF GAMEWEEK 14

Nathan Patterson (knee) – Absent since Gameweek 9 but is now back in training.

Darwin Nunez (muscle) – Issue ruled him out of Gameweek 13 defeat at Nottingham Forest.

Romeo Lavia (muscle) – Out since Gameweek 5 and back in training building match fitness.

Lucas Paqueta (shoulder) – No timeframe given by manager