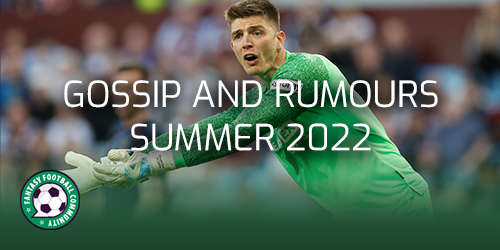 Romano is reporting that Nick Pope (Newcastle) and Malcolm Ebiowei (Crystal Palace) will both complete their moves this week. Pope was relegated with Burnley last season, mean while Ebiowei looks set to reject Manchester United in favour of Palace.

FPL Comment: Pope is a highly regarded FPL goalkeeper. He had low ownership during the 2021/22 season, mostly as a result of Burnley’s defensive problems. However, playing behind a strengthened Newcastle defence would improve his appeal and likely make him a popular target. Ebiowei played for Derby last season and was a target of Ten Hag’s United. However the winger has opted for Palace and could make an excellent option there. Ebiowei played 15 times for Derby last season in what was his break though year. He scored once.

Give me Sport: High valuation for JWP

Give me Sport are reporting that Southampton are hoping to ward off interest in James Ward-Prowse with a high valuation. Manchester City, Manchester United, Tottenham and West Ham are all reportedly interested in signing the Southampton midfielder. Southampton have placed a £75m valuation on Ward-Prowse.

FPL Comment: James Ward-Prowse returned 159 FPL points last season, he was the 11th highest scoring midfielder in the game. The midfielder as a large route to points with his set piece threat. He will likely be overlooked in FPL at Southampton in the early Gameweeks as the Saints have a tricky set of fixtures to start the season. However, if he moves away from St Mary’s he will likely grow quickly in popularity.

Romano is reporting that Arsenal and Man City are still working on the deal for Gabriel Jesus.

FPL Comment: Jesus is a proven Premier League goal scorer. However his limited game time had made him a difficult FPL pick. However, if he moves to Arsenal and is a regular starter he would be an excellent FPL asset.

Sky Sports: Pope to the Toon

Sky Sports are reporting that Newcastle United are in talks with Burnley over goalkeeper Nick Pope. Pope and Burnley were relegated last season, this move would see Pope available in FPL again for the 2022/23 season.

FPL Comment: Pope and Burnley had a difficult season last year which meant that he wasn’t as attractive an FPL option. However, if Pope moves to Newcastle he should rightly be on the radar of FPL managers. Newcastle have strengthened their defence with the permanent signing of Matt Targett as well as Keiran Trippier being available again post injury. If Pope signs for Newcastle he could be a great rotating pair option in FPL.

The Times are reporting that Arsenal have made an offer for Raphinha. However that it will be rejected as it is far below where Leeds value the player. Leeds value the midfielder at £50m. This is also substantiated by Fabrizio Romano.

FPL Comment: Raphinha’s attractiveness in FPL next season will be determined by who he plays for. If Live FPL are correct and he is priced at £7.5m at Leeds he will have low ownership. If Raphinha moves to Arsenal or another Premier League team he could offer good value for money.

Di Marzio is reporting that West Ham are targeting the signature of Amando Broja from Chelsea. The forward spent last season on loan at Southampton, however returned to his parent club at the end of the season.

FPL Comment: Broja made 21 starts for Southampton last season. In that time Broja scored six goals and registered two assists. He averaged 3.9 points per start. If Broja gets a permanent move to a Premier League club such as West Ham he could be a good budget forward option in 2022/23.

Footballl London are reporting that Spurs made spoke to Eriksen’s camp but have not followed up interest in resigning the player.  In addition Goal are reporting that Erik ten Hag want Man United to sign both Eriksen and Frenkie de Jong this summer.

FPL Comment: Eriksen proved that he us still a fantastic asset for Premier League clubs. He made nine starts for Brentford last season, in that time he registered five attacking returns. If Eriksen does sign for a Premier League club this summer he will likely be a popular FPL asset next season.

The Mail and Indy Sport: Richarlison in demand

Both The Mail and Indy Sport are reporting that Chelsea have entered the race to sign RicharIison. Both London clubs would have to pay the £50m that Everton reportedly want for the forward.

FPL Comment: FPL managers would enjoy having a good Chelsea forward option for the new season. There was a lack of consistency of form and starts for Lukaku and Werner least season. Therefore if Richarlison moves to the Blues he could be a good investment option for FPL managers. Richarlison scored 125 points last season. He was the ninth highest scoring forward in the game in 2021/22.