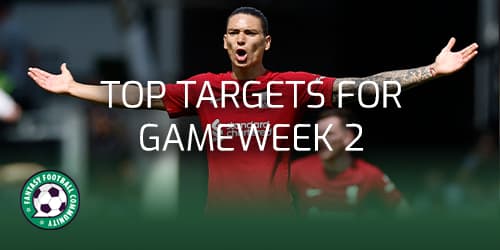 David Munday is back with another top targets article. This week he shares his top three targets for Gameweek 2 ahead of the deadline on Saturday.

I would encourage Fantasy Premier League managers not to leap into a knee-jerk reaction too hard this early in the season.

As many of you will know, I am not a massive fan of making any transfers for Gameweek 2. If you’re looking at your squad and are fairly confident it can perform on the second weekend of the season, I’d stick with it.

More data always goes a long way when it comes to getting your transfers right. And if you roll the transfer going into Gameweek 3, you’ll have two for free and could even consider a mini-Wildcard by making three changes for a minus four.

That said, I’ve had an in-depth look at all the Gameweek 1 outings and picked out some potentially useful options. As is always the case at this time of the season, take some of these numbers with a pinch of salt as we are working with a very small sample size at present.

Much has been made in pre-season of Leeds’ new winger Brenden Aaronson (£5.5m) and he certainly impressed in the eye test during their 2-1 win over Wolves. The American was inches away from an attacking return, were it not for the outstretched toe of Rayan Ait-Nouri (£4.5m). However, rather than go through the whole phone book and start by putting a call into Aaronson, I’ve actually got my eye on the Whites’ other winger.

Jack Harrison (£6.0m) was the statistical star of the show at Elland Road on Saturday, recording a whopping six key passes and creating two big chances as he assisted Rodrigo‘s (£6.0m) first goal of the campaign. Not only was that superior to Aaronson’s total of zero for both statistics, it also puts Harrison top of the entire Premier League for each after the first Gameweek. It is, of course, early days, but a meeting with Southampton in Gameweek 2 could continue the winger’s appeal. Only Nottingham Forest gave up more shots than the Saints over the opening weekend of 2022/23.

I don’t think it will be long before Darwin Nunez (£9.0m) arrives in my FPL team this season. He might not have started in the Gameweek 1 draw at Fulham but his impact after coming was almost instant. Despite playing just 39 minutes, he finished the match top for shots, top for shots in the box and top for big chances. Meanwhile, only Aleksandar Mitrovic (£6.6m) left Craven Cottage with a higher expected goal involvement (xGI) score than the Uruguayan.

Such an impressive display should see Darwin into the starting line-up sooner rather than later, possibly as early as the Gameweek 2 visit of Crystal Palace to Anfield. As ever, make sure you keep an eye on Neale’s excellent team news round-ups and predicted line-ups on Fantasy Football Scout. With Manchester United (away), Bournemouth (home) and Newcastle (home) Liverpool’s following three fixtures, there’s plenty of chances for Darwin to rack up some points.

It probably doesn’t take too much to work out why I’ve picked out Pascal Gross (£5.5m) for Gameweek 2. I had been hoping someone from Brighton would step up in Gameweek 1 considering their favourable fixtures at the start of the season. I had wondered if it might be Alexis Mac Allister (£5.5m), who I toyed with in a few pre-season drafts didn’t follow through on. In the end, I decided to wait to see who Brighton’s standout attacking asset might be.

Sunday’s win over Manchester United suggests it could be Gross who can capitalise on the Seagulls favourable run of fixtures. Between now and Gameweek 7, they rank highest for attacking difficulty on the Fantasy Football Scout Season Ticker, starting with Newcastle in Gameweek 2. Against United, Gross finished the match top for big chances, joint-top for shots on target and top for xGI.