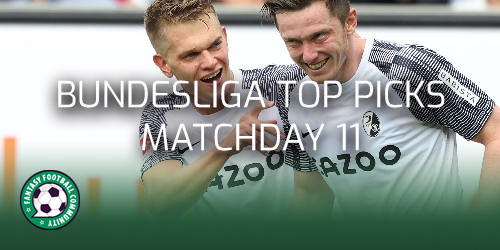 FBL Thinker is an expert at the Fantasy Bundesliga game and here he shares his top weekly picks for Matchday 11.

There was a midweek round of DFB Pokal games for most Bundesliga teams, meaning possible rotations in Matchday 11’s starting line-ups. Below are the top picks for this week.

Becker has been one of the most promising players in attack from surprise league leaders Union. An injury doubt for Jordan Pefok ensures a start for Becker against Bochum, who are conceding plenty of goals.

Freiburg’s leading scorer Gregoritsch has four goals and is about to face a Bremen team that’s missing key defenders. So it’s a wonderful opportunity for him to increase his goal tally.

Team-mate Grifo has been in great form and is instrumental to Freiburg’s successful start to the season. After a bad loss versus Bayern, they hope to bounce back at home to Bremen, which presents an ideal scenario for Grifo to deliver a haul of goals and assists.

Kimmich has been playing in a much more advanced position for Nagelsmann, shown by his contribution of assists. He will play 90 mins against Hoffenheim and, with such recent form, his set pieces make him a very reliable pick in a week where Bayern are expected to rotate.

Pavard is one of the most consistent defenders in the game. Opponents Hoffenheim have a poor head-to-head record against Bayern, presenting a high chance of another clean sheet.

Playing at left-back, Hector combines well with Kainz down the flank to create many chances. Alongside this, he has a very good chance of collecting a clean sheet, whilst playing in the early kick-off provides much-needed flexibility.

Union’s superb defence has conceded very few goals. Expect another successful shut-out when away to Bochum.

Flekken plays behind a stable backline for one of the league’s best home defences. Furthermore, Bremen are not good travellers.