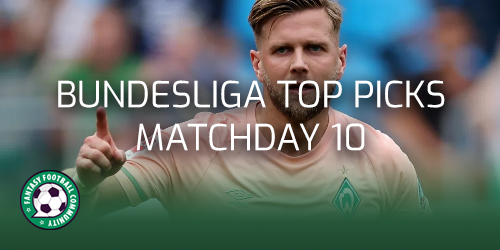 FBL Thinker is an expert at the Fantasy Bundesliga game and here he shares his top weekly picks for Matchday 10.

An unexpected slip-up by Bayern against Dortmund and Gladbach’s surprise return to form were the stories of Matchday 9. We expect similar excitement from the upcoming round.

Füllkrug is the most in-form striker in the league, having scored and assisted in his last two matches. A home game against defensively-suspect Mainz, who concede a lot of goals on the road, makes Füllkrug an essential pick for this week.

Given the injury to Thomas Muller and the suspension of Kingsley Coman, Mane again looks to be the most nailed in Bayern’s forward line. A tricky fixture against Freiburg awaits but Bayern have an attacking prowess and Mane is in good form.

Nkunku has been hot and cold but Leipzig are picking up form and he is looking more involved in the attack. A stand-alone fixture against leaky Hertha Berlin makes him a must-own for this week.

Gladbach have been a yo-yo team this season, conceding five against Bremen and then coming back to score five past Koln in the derby. Hofmann is an integral part of the attack and he can be backed to deliver points against Wolfsburg.

From a cheap enabler to one of the most attacking Bundesliga right-backs, Weiser is one of the game’s best defenders. A home game against Mainz could bring another double-digit score, with potential at both ends.

With uncertainty and rotation expected in Leipzig and Bayern defences, Hector gives assurance of a starting place alongside a good fixture. Though Koln haven’t been defensively strong, playing against Augsburg offers a good chance of keeping a clean sheet

Sommer has been probably the best keeper this season and has bailed out Gladbach’s defence on many occasions. He comes at a premium price but has already delivered good point hauls and, against a defensive-minded Wolfsburg, can do so again.

Stuttgart sacked their manager after their latest defeat and have a must-win encounter with Bochum. Their opponents are terrible when away from home so, if Stuttgart have any hope of keeping them quiet, Muller has to play a central role in that. He could be one of the week’s biggest surprises.