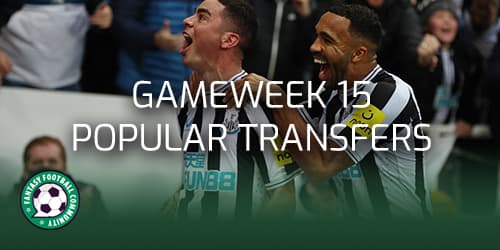 Watching the transfer market is one of the biggest parts of FPL management. Ensuring that your players don’t drop in price and cost you team value is key. We assess the transfer market and the most popular transfers ahead of Gameweek 15. The Official FPL website offers lots of information, including for the round ahead.

Players rise and fall in price in FPL based on the number of transfers in or out they have. Here we look at who are the most popular transfers ahead of Gameweek 15 deadline.

The in-form Newcastle duo of Miguel Almiron (£5.7m) and Callum Wilson (£7.5m) are the most popular transfer in this week. Wilson has over 961,000 new managers, whilst Almiron has collected over 671,000 new owners.

Brighton midfielder Leandro Trossard (£6.9m) is the third most transfered in player this week. The Tottenham forward Harry Kane is the second most popular transfer. Trossard has returned a goal against both Man City and Chelsea in the last two weeks. Only two midfielders in the game have returned more FPL points than Trossard this season and, with fixtures against Wolves and Aston Villa coming before the World Cup, he continues to look like a good asset for managers.

Man City midfielder Kevin De Bruyne (£12.5m) is the fourth most transferred in player. The Belgian has banked returns in six of his last seven Premier League matches.

After picking up his fifth yellow card in Gameweek 14 Ivan Toney (£7.4m) is suspended in Gameweek 15. As a result he is the most transferred out player ahead of the deadline. Toney has been sold by over 1million FPL managers.

Phil Foden (£8.5m) was benched in the last two Premier League matches and played the full 90 minutes in the Champions League. This has made him the second most transferred out. Foden has been sold by over 242,000 managers ahead of a match at home to Fulham on Saturday afternoon.

Wilfried Zaha (£7.5m) is the third most transferred out. He was a popular buy for FPL managers a couple of Gameweeks ago. However, he has since failed to return in the last two matches. Zaha has two away matches ahead of the World Cup. The midfielder hasn’t returned in any of Crystal Palace’s last three away fixtures.

Injury doubt Antony (£7.6m) is also a popular transfer out for managers.