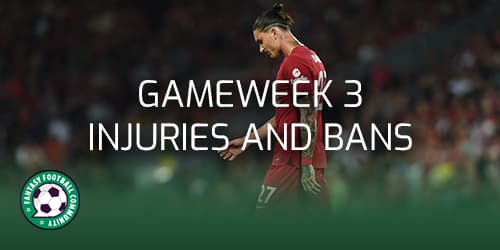 FPL managers are always looking for news that could give them an edge over their rivals. Keeping up to date with injuries and bans means we shorten the chance of issues within our fantasy teams.

Players to monitor ahead of Gameweek 4

Emile Smith-Rowe (Lack of match fitness) Part of a group of four injured players who missed much of pre-season – three of which will hopefully “be available for selection” on 5/8.

Tomiyasu (Lack of match fitness) Part of a group of four injured players who missed much of pre-season – three of which will hopefully “be available for selection” on 5/8.

Hause- Lack of match fitness Back in full training as of 19/8 after having knee surgery in pre-season.

Solanke- Ankle injury Missed the match against Man City on 13/8 as a precaution because of an ankle problem. A “maybe” for the Arsenal game on 20/8.

Pulisic- Achilles injury Returned to training on 19/8 after issues with his Achilles.

Jack Butland (Hand injury) Sustained a hand injury on 19/7 and could be out for up to eight weeks.

Bamford- Muscle injury Withdrawn in the match against Southampton on 13/8 with tightness in his adductor but his manager hopes the issue isn’t serious.

Cooper- Knock Had been on the cusp of a return from injury in the Southampton game on 13/8 but missed out after picking up a fresh issue.

Martial- Achilles injury Returned to training on 19/8 after issues with his Achilles.

Fernandez (Calf injury).  Has missed all of pre-season with a calf issue. He is being gradually reintegrated into team training as of 12/8.

Fraser- Back injury Missed the Brighton game on 13/8 after suffering a back spasm. However, has trained since then and his manager hopes he will be fit for the Man City match on 21/8.

Jamal Lewis (Groin Injury). Has missed all of pre-season with a groin issue but nearing a return as of 5/8.

Krafth- Back injury. It was reported on 12/8 that he was complaining of back issues even though scans came back clear. His manager hopes his absence will be “short term”.

Targett- Hamstring injury Missed the Brighton game on 13/8 with a small hamstring strain. A “very late decision” will be made on his involvement against Man City on 21/8.

Colback- Illness Missed the West Ham game on 14/8 through illness. His manager said he was “still suffering” ahead of the Everton game on 20/8.

Niakhaté- Knock Forced off during the 14/8 clash with West Ham United. His manager would only say “we’ll see” when asked on 19/8 how long the defender would be out..

Nelson- Muscle injury, His manager confirmed on 12/8 that he had picked up a muscle injury and was set for a spell on the side-lines. No timeframe has been set on his return.

Diego Carlos- Achilles injury Ruptured his Achilles tendon in the match against Everton on 13/8 and is set for a long spell on the sidelines.

Jacob Moder (Knee injury) Suffered what seemed like a serious-looking knee injury in the match against Norwich on 2/4. An ACL rupture was soon confirmed and he faces a long spell on the side-lines.

Brooks- Lack of match fitness Working his way back to full fitness after successfully fighting cancer.

Ryan Fredericks (Lack of match fitness) Looks set to miss the start of 2022/23 after suffering an injury in pre-season.

Joe Rothwell (Thigh injury) Ruled out of the start of 2022/23 with a quad injury. His manager hopes that he’ll be back in the “coming weeks”.

Kristoffer Ajer (Hamstring injury) Set to miss the start of 2022/23 after undergoing hamstring surgery in pre-season.

Pinnock (Knee injury) Looks set to miss the start of 2022/23 with a knee injury. His manager confirmed on 30/7 that he will miss the “first part of the season”.

Alonso (Lack of match fitness). Is not in training as he seeks a move away from the club so won’t be considered for the Spurs game on 14/8.

Kovacic- Knee injury Ruled out of the Spurs game on 14/8 after complaining of knee issues.

Ferguson- Foot injury Reports on 11/8 suggest he could be out for up to eight weeks with a foot injury. His manager confirmed a “setback” on 12/8 but didn’t put a timeframe on the injury.

James McArthur (Groin Injury) It was reported on 30/7 that he is set for a spell on the sidelines with a recurrence of a groin issue.

James Tomkins (Calf injury) Ruled out of the Arsenal game on 5/8 with a calf issue.

Calvert Lewin (Knee injury) It was confirmed on 3/8 that he had sustained a knee injury in training and would miss the match against Chelsea on 6/8.

Godfrey- Leg injury Fractured his fibula in the match against Chelsea on 6/8 and was ruled out for three months.

Gomes- Muscle injury Missed the entirety of pre-season but remains “a week or two away” from returning as of 4/8. Still missing as of 19/8.

Mina- Ankle injury Sustained ankle ligament damage in the match against Chelsea on 6/8 and is set for a spell on the side lines. No timeframe has so far been put on his return.

Andros Townsend (Knee injury) Picked up a knee injury in the FA Cup tie against Crystal Palace on 20/3. Ruled out for the rest of the season on 23/3 after ACL damage was diagnosed. Thought to be three months from a recovery as of 28/6.

Harry Wilson (Knee injury) Could be set for a long period on the sidelines with a knee injury picked up on 29/7.

Soloman- Knee injury It was confirmed on 11/8 that he was set for a long period on the sidelines with a knee injury.

Luke Ayling (Knee injury) Ruled out for two to four months on 20/5 after undergoing knee surgery. His manager said on 13/7 that he would miss the start of 2022/23 but could return to training in August.

Stuart Dallas (Leg injury) Stretchered off with a season-ending leg injury on 30/4. A scan later revealed a femoral fracture and he will be side-lined for around six months.

Junior Firpo (Knock) Ruled out for eight weeks with an unspecified injury after picking up a ‘knock’ in the friendly against Blackpool on 7/7.

Ryan Bertrand (Knee injury) Twisted his knee in the warm-up before the Man City game on 26/12. Expected to be out for the season.

Ricardo Pereira (Achilles injury) Sustained an Achilles issue in the match against Sevilla on 31/7 and his manager said the injury “doesn’t look so good”. Ruled out for up to six months on 5/8.

Curtis Jones (Muscle injury) Missed out in Liverpool’s final pre-season friendlies after “feeling” an injury in training. Ruled out of the Fulham game on 6/8 and no timeframe has been put on his return.

Kelleher(Muscle injury) Picked up an injury while on international duty in June. Still two to three weeks away from a return as of 29/7.

Konate (Knock) Picked up a knock in Liverpool’s pre-season friendly against Strasbourg on 31/7. Ruled out of the Fulham game on 6/8 and will be out for a “while”.

Matip- Groin Injury Missed the Crystal Palace game on 15/8 with a groin issue. Subsequently ruled out for two weeks.

Oxlade Chamberlain (Hamstring injury) Sustained a serious hamstring injury on 15/7. No exact timeframe has been placed on his return but his manager said on 29/7 that it would “take longer” than a few weeks.

Ramsay- Muscle injury Missed the start of 2022/23 with an unspecified issue. Still side-lined as of 19/8.

Thiago- Hamstring injury Picked up a hamstring injury in the match against Fulham on 6/8. His manager said on 12/8 that he could be out for 4-6 weeks.

Laporte (Knee injury) Had knee surgery after the conclusion of the 2021/22 campaign and is expected to be missing until September.

Lindelof- Thigh injury Pulled out the squad to face Brighton on 7/8 with a minor thigh issue. Still sidelined as of 12/8.

Pellestri- Ankle injury Suffered a twisted ankle in the friendly against Atletico Madrid on 30/7. Media reports suggest he will be out for 6-8 weeks.

Shelvey- Hamstring injury Missed the start of 2022/23 due to a hamstring injury picked up in pre-season. Has since undergone surgery and his manager ruled him out for around 12 weeks on 12/8.

Omar Richards (Leg injury) Ruled out for an estimated 10 weeks after suffering a hairline fracture to his leg.

Tino Livromento (Knee injury) Taken off on a stretcher in the match against Brighton on 24/4 after suffering a serious knee injury. Likely to miss the rest of 2022.

Perraud- Leg injury Had a disrupted pre-season due to a leg injury suffered at the back-end of 2021/22. The player himself admitted that he was short of fitness in early August. Ruled out of the Spurs match on 6/8 and the Leeds game on 13/8

Oliver Skipp (Foot injury) Sustained a fractured foot in pre-season. Will miss “two or three games” at the start of 2022/23.

Romero- Muscle injury His manager confirmed on 18/8 that he had picked up a minor abductor injury and that he wouldn’t be risked against Wolves on 20/8.

Aguerd (Ankle injury) Sustained an ankle injury against Rangers on 17/7 and has since undergone surgery.

Chiquinho(Knee injury) Injured in a pre-season friendly on 9/7. Is set for knee surgery and faces six months on the side-lines.

Nunez- 3 Match Ban Sent off for violent conduct against Crystal Palace on 15/8.

For even more team news ahead of the deadline check out the Fantasy Football Scout Press Conference round-ups. They’ll provided the latest manager comments on key FPL injuries and bans. The team news live stream on Fantasy Football Scout’s YouTube channel will give you the most up-to-date knowledge. You can find this as written content on site and on twitter.