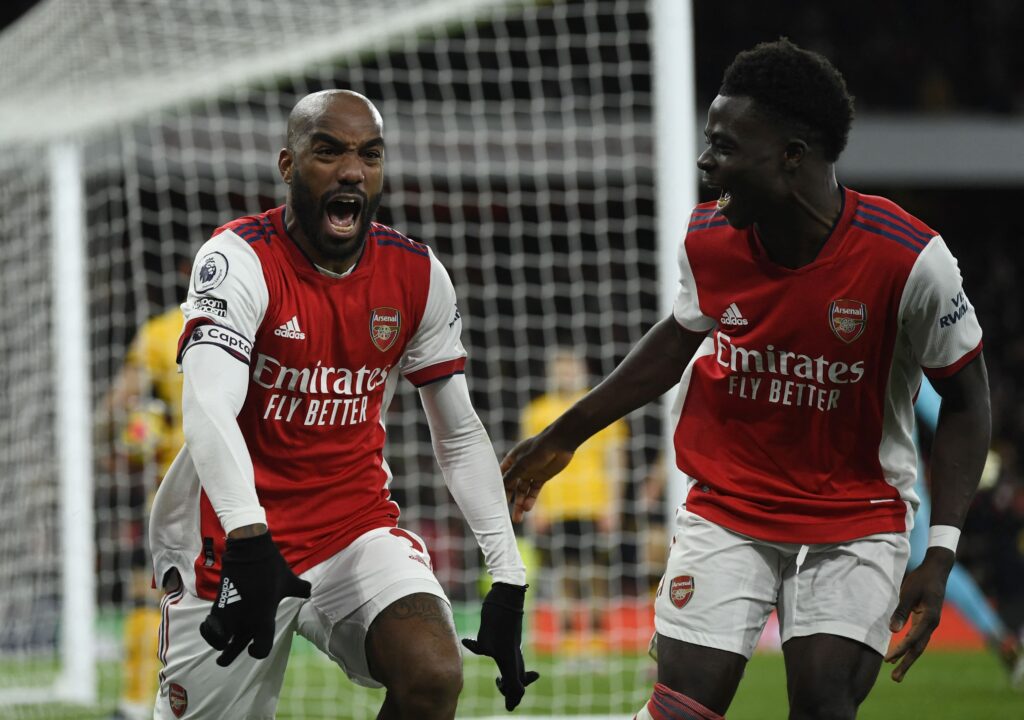 In a Double Gameweek where six teams play twice, we assess whether Arsenal’s Alexandre Lacazette is the best option up front.

All 20 teams play over 13 matches, with Arsenal one of six teams appearing twice.

Whisper it quietly but Alexandre Lacazette might be a good FPL option going forward. In his four previous North London seasons, each have brought double-figure goal returns and three saw at least 13 netted. Despite this, he has never been more than a fringe Fantasy asset.

The presence of Pierre-Emerick Aubameyang always brought rotation fears, whereby he played under 2,000 minutes (the equivalent of 22 full matches) in both 2019/20 and 2020/21. It makes his 17 and 16 goal involvements more impressive.

But Aubameyang has now left and Lacazette has therefore started the Gunners’ last 11 league games. This may actually be the one campaign where he fails to reach ten goals, yet this run has brought two plus eight assists.

Goalless in six matches – thanks to a Jose Sa own goal – Lacazette has instead set up five throughout his last four. Arsenal are one of only two sides to play twice in Gameweek 29 whilst not having a Blank Gameweek 30, with a steady run of decent fixtures afterwards.

Their pair of home games against Leicester and Liverpool don’t look the most appealing but, on a streak of four successive wins, they won’t fear anyone in their pursuit for a fourth-placed finish.

Despite Leicester keeping back-to-back clean sheets against Burnley and Leeds, they have consistently ranked amongst the season’s leakiest defences. That alone could justify a Lacazette selection, as Liverpool’s five clean sheets from seven makes them a much tougher proposition.

Without any cup competitions, there should be no rotation threat for Saka. Combine this with the above stats and price difference, what will hold back Lacazette is the FPL community’s affection for Saka.

However, those using a Free Hit chip or looking for a short-term differential punt before wildcarding could easily opt for the Frenchman.

Part of this is because there are so few appealing forwards in FPL right now. Whilst Saka is cheaper and a bigger goal threat, there are plenty of good midfielders. This is Lacazette’s competition:

Playing three matches over two Gameweeks is treble that of Weghorst, Dennis, Armando Broja and Che Adams. With Lacazette playing regularly for in-form Arsenal, providing assists and having more matches than other forwards, he is a strong Double Gameweek 29 option.

Alexandre Lacazette posted a scrape picked up in training, which sparked some discussions about whether this is an injury.

Official FPL say the Arsenal man is the game’s most in-form striker.

Although FPL veteran Shiva FPL doesn’t know how to judge his form when there are no goals and a low expected assists (xA) tally.