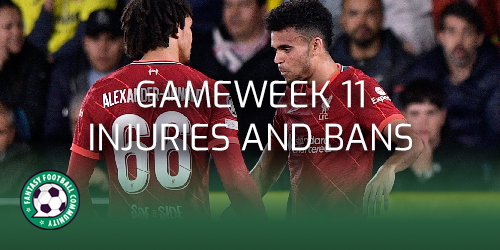 Being able to navigate around unavailable players is key to FPL success. Together with some useful Fantasy Football Scout information, here is the current list of injuries and bans heading into Gameweek 11.

THE NOTABLE INJURIES AND BANS OF GAMEWEEK 11

Oleksandr Zinchenko (calf) – Absent for the win over Liverpool in Gameweek 10.

N’Golo Kante (hamstring) – Out since Gameweek 3.

Anthony Gordon (suspended) – Fifth yellow card of the season and will miss Gameweek 11.

Aleksandar Mitrovic (foot) – Same knock from the international break, which led to him missing Gameweek 10.

Timothy Castagne (eye) – Taken off in the defeat to Bournemouth with an eye injury.

Luis Diaz (knee) – Jurgen Klopp said his Gameweek 10 withdrawal was “something with the knee, not good.”

Scott McTominey (suspended) – Fifth booking of the season, will miss one match.

Harry Kane (knock) – Late removal in Gameweek 10 but he said after the game that he “thinks” it’s just a knock.