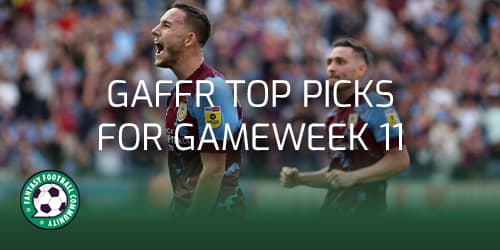 With a quick turnaround we take a look at the GAFFR top picks for Gameweek 11. Using the fixture ticker on the Official GAFFR website and form we can pick out some players with lots of potential for the upcoming gameweek.

Looking at GAFFR top picks for Gameweek 11 can help managers with those all-important decisions as the deadline quickly approaches. Deciding on which players to bring in and which players to captain are two of the biggest factors in any given gameweek. With the options below we can hopefully bring some clarity.

Blackburn continue their great start to the season as they currently sit third in the Championship at the time of writing. They face Luton in Gameweek 11. Luton have really struggled to gain any sort of defensive consistency this season, keeping only two clean sheets in their nine matches played so far in all competitions.

Although GAFFR managers may have had higher expectations of Brereton this season, he still resides third amongst all strikers for the most GAFFR points. Those returns consist of four goals and one assist. With a great fixture ahead and playing against a defensively poor side, Brereton could have great potential in Gameweek 11.

Promotion favourites Burnley look set to carry on climbing their way to the top of the table. With two draws in the last two matches, the motivation to win will likely be increased. Burnley play against Bristol City in Gameweek 11. Bristol City, although relentless goal scorers, have huge defensive fragilities. In their eight matches played so far, they have conceded more than two goals in half of them. This could suggest that they are a team to target.

Brownhill comes in at a fantastically cheap price of just £6.2m. A type of price-tag that can help enable the pricier options within our fantasy teams. His price isn’t the only reason he has appeal. The Burnley man ranks as the second highest scoring GAFFR midfielder in the game. His 64 points come from his four goals and two assists. At a great price, in very good form and a good fixture ahead, Brownhill could have bags of potential for Gameweek 11.

QPR can be very inconsistent at times, but they can also provide plenty of goals. They face another inconsistent side in Stoke City for Gameweek 11. In their nine matches so far Stoke have lost four of them whilst also conceding two goals or more in four of those same nine matches.

Amongst all other midfielders in the game, £8.2m Chair currently sits at the top of the pile in GAFFR. His huge 66 points, at the time of writing, come from his three goals and three assists. Although quiet in Gameweek 9, Chair still came away with a key pass and a shot on target, a small fraction of his potential.

Although Norwich have a tough game against West Brom on paper, that could be easily disregarded for a several factors. Norwich currently sit second place in the Championship and that is due to their great form. They have now put together a run of five wins in a row and face a Baggies side who have failed to keep a clean sheet in their last 4 matches.

£11.4m Pukki comes in at a high price. However, his penalty duty, increasing game time, goal and assist in his last two matches and leaky opponents could suggest he has good potential for the week ahead.

Be sure to stay up to date with all of the GAFFR articles available on site using this link here.