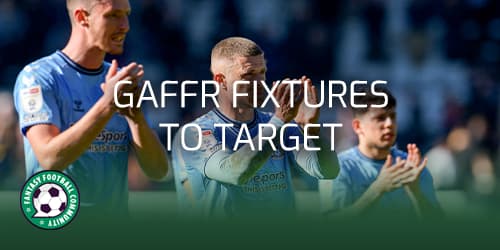 FPL Shake n Bake might be on holiday but he still can’t switch off from the start of the new GAFFR Championship season. Brett has taken a look at the best GAFFR fixtures to target in his latest article.

Birmingham are a club I expect to struggle this season. Pre-season defeats to Solihull Moors hasn’t change my expectations.

I’ve been really impressed with Millwall’s recruitment this summer. But it’s been one of their existing players that has impressed in pre-season. Benik Afobe has been in fine form, whilst Stoke have been conceding plenty.

Now I realise there may be some bias here! I also appreciate that 30,000 home fans will make this a potentially difficult start for my beloved Sky Blues, but Coventry have gone unbeaten all pre-season.Scoring 22 and only conceding three goals along the way.

Despite rumours of transfers from Gyokeres, Hamer and O’Hare, all three remain at the club ahead of the start of the season.

Meanwhile, Alex Neil has complained about an under strength squad at Sunderland. With just a few days left ahead of the start of the season, time may run out for the Black Cats to get some reinforcements