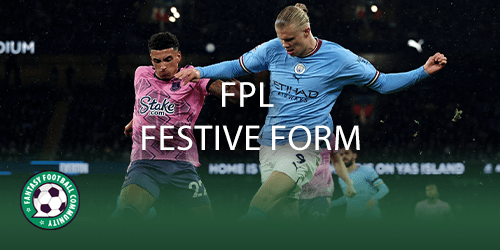 It has been a very busy period in the Premier League over the last couple of weeks. Teams in the league have faced an intense schedule. For that reason we take a look at FPL festive form to see how some of the teams have dealt with their hectic run of matches.

Taking a look at FPL festive form could be very beneficial to Fantasy Premier League managers. Identifying teams and players form can help with some of the most important decisions in the game, like captaincy, transfers and chip usage.

The Reds have been one of the most in-form teams since the restart. They have played three matches since the World Cup, winning against Nottingham Forest, Wolves and Bournemouth. During that period Manchester United have scored seven goals and kept an impressive three clean sheets.

One player who has been in fine form during those three matches is Marcus Rashford (£7m). The midfielder contributed to four out of seven of Manchester United’s goals, scoring three and assisting another.

Another player who has caught they eye in FPL is Luke Shaw (£5.1m). The defender managed three clean sheets, one goal and eight bonus, meaning he totalled 32 points in three matches and averaged more than 10.5 points per game.

Manchester United face Manchester City and Arsenal in the next two matches but after that have good fixtures against the likes of Crystal Palace, Leeds, Leicester and Brentford. With that in mind, it will be interesting to see if managers stay faithful to their in-form assets.

Fulham have also returned from the World Cup break in fine form. The newly promoted side have ploughed through their festive period, winning three out three of their matches against Crystal Palace, Southampton and Leicester.

Scoring six goals and keeping two out of three clean sheets, things couldn’t have been much better for Fulham. Aleksander Mitrovic (£7.2m) contributed to half of the goals Fulham scored with two goals and one assist. However, it’s not been plain sailing for the striker. He missed a last minute penalty and picked up a yellow card, banning him from the next fixture against Chelsea.

Tim Ream (£4.5m) has also maintained a great run in FPL. In the same three matches, the defender picked up a huge 25 points, scoring and keeping two clean sheets whilst also securing five bonus points to top up his total.

Fulham face fixtures against teams like Newcastle, Spurs, and Chelsea moving forward so FPL managers could have a very tough decision to make regarding the assets that have performed so well for them in the festive period.

The festive period has been a mixed bag for the Reds. Liverpool won two and lost one of their three matches. During that period they failed to keep a single clean sheet whilst also conceding five goals, concerning from a defensive point of view.

The goals have come for Liverpool though. They netted six times in the same three match period, scoring in every game they played. The biggest contributor towards their goals was Mohamed Salah (£12.9m). The Egyptian picked up a goal and an assist.

One player many within the Fantasy Football community expected a lot more from was striker Darwin Nunez (£8.9m). Although he maintained some fantastic stats during those three matches, he managed just one assist. Many managers could now be looking to sell, even with ok fixtures moving forward.

Manchester City have been an interesting watch as they attempt to chase down league leaders Arsenal. At the time of writing the champions have managed one win and one draw. Within that period, they have failed to keep a single clean sheet but netted four goals.

Their recent defensive form is concerning as an FPL manager. In addition, key defensive assets like Joao Cancelo (£7.3m) and Kyle Walker (£4.8m) also failed to start any of the matches upon returning from the World Cup.

One man has stood out though. Striker Erling Haaland continued his relentless form this season with three goals in his two matches played (£12.2m). Jack Grealish (£6.8m) also started both matches which could be a surprise to many. The midfielder managed to bag two assists as well.

Manchester City have double Gameweeks ahead so it could be interesting to see where FPL managers go in terms of investment. With rotation to key defensive assets, managers may feel like they will have to take some risk to gain reward moving forward.

You can stay up to date with all of our most recent Fantasy Premier League articles right here.