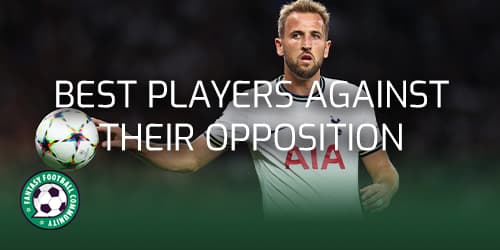 We take a look at some of the best players against their Gameweek 8 opposition. Using previous head-to-head records and underlying stats from the Fantasy Football Scout members area to help us pick out some great FPL picks for the round ahead.

Picking out the best players against their Gameweek 8 opposition could be helpful in making both transfer and captaincy decisions. The more information FPL managers have the better our decisions tend to be in terms of having successful assets in our fantasy teams.

Tottenham face a meeting against the struggling Leicester next. Son’s form remains in question whilst his record against the Foxes should not be. In the 12 matches the midfielder has played against his Gameweek 8 opponents he has returned in seven of them.

Son’s fantastic head-to head record against Leicester consists of two double digit hauls, six goals and six assists. For those activating their wildcard this week, Son could be a fantastic addition to the team.

Staying with the Gameweek 8 meeting between Tottenham and Leicester. In-form forward Harry Kane could be another way to attack the leaky Leicester backline. In the 14 matches Kane has played against the Foxes he has come away with a huge 10 returns.

Those returns against Leicester have consisted of a whopping seven double-digit returns, 17 goals and four assists. This means that Kane has a total of 21 goal contributions in just 12 matches, close to two returns per match played.

The Man City midfielder continues his solid start to the season with his four returns in six matches. Kevin De Bruyne faces Wolves in Gameweek 8, an opponent whom he has had lots of success against. In his six matches against Wolves, he has collected four attacking returns. Those returns came from his five goals and three assists.

With a 24-point return in his last match those that are including him in their wildcards will be hopeful of similar joy.

Midfielder Bowen finished his 21/22 campaign on 200+ points but has failed to get a single attacking return in the current campaign. He faces the struggling Everton in Gameweek 8. Against Everton Bowen has managed to come away with goal contributions in two of the four played. With great fixtures ahead, could the midfielder make his way back into managers minds upon wildcarding?

You can stay up to date with our wide range of FPL articles all in one place here.