Chelsea play twice in Double Gameweek 34. So let’s assess their best FPL options ahead of matches against West Ham and Man United.

As seen below, Chelsea rank top of the Fixture Ticker from Fantasy Football Scout.

It’s irritating that they’ve just lost 4-1 and 4-2 at home to Brentford and Arsenal, at a time when FPL managers are about to purchase their assets. Out of the Champions League but in next month’s FA Cup final, Chelsea are likely to stay in third place. Therefore, as tempting as Mason Mount, Kai Havertz and Reece James are, could motivation be another red flag?

This week’s biggest talking point in the FPL universe has been whether to go with Mount (£7.6m) or Havertz (£7.9m). These mid-priced midfielders are in good form, so those using a Wildcard or Free Hit may even look to own both.

Mount tends to play more minutes and has recently brought in 19 points versus Southampton. In all competitions, his last ten matches have seen five goals and seven assists.

Whereas Havertz has out-of-position potential by often playing up front, with six goals and an assist from his last nine starts.

Here is a comparison of their last six Premier League appearances, including in midweek against Arsenal. 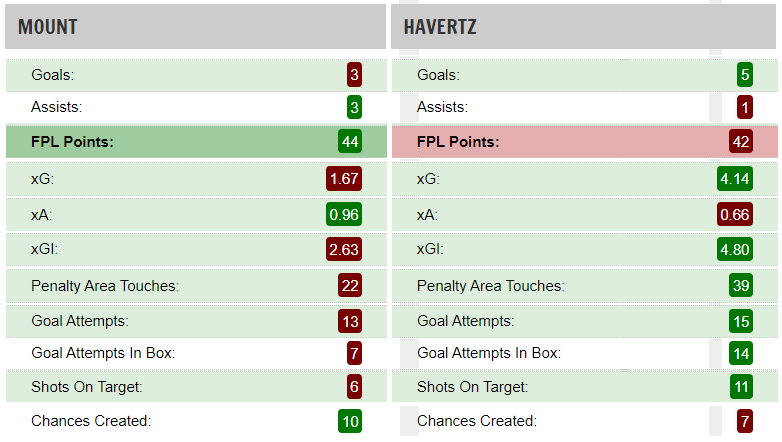 It shows that Havertz almost doubles Mount for expected goal involvement (xGI) and penalty area touches. Furthermore, his average position is higher up the pitch.

Yet the German international has recently had his minutes managed. A substitute on Wednesday night, he was taken off at half-time at Southampton and wasn’t used against Middlesbrough in last month’s FA Cup match.

This could be portrayed in two ways. One, he’s had his rest and should definitely start the remaining matches. Two, he simply isn’t as nailed-on as Mount. How each manager interprets this will likely determine which option they go with.

Both Mount and Havertz were owned by just 6.7% of the top 10k heading into the last round. However, three of the five most-bought players leading into Double Gameweek 34 are from Thomas Tuchel’s side – Mount, James and Timo Werner.

Chelsea’s defence has been very popular all season, delivering 14 clean sheets and a fantastic 39 attacking returns. Despite this, their last three home outings in all competitions have seen 11 goals conceded.

Usually reliable for minutes, a minor problem kept Antonio Rudiger absent on Wednesday and Tuchel says “he will be close for the West Ham game”, which will concern his 2.22 million owners.

Then there is James, a flying wing-back that has hauls of 21, 18, 18, 13 and 12 points this season. His playing time is much more unpredictable and – for various reasons – has only once scored more than a single point since Gameweek 18. Even worse, Tuchel may occasionally move him to centre-back.

“I love him in both positions. The back three is less demanding than the wing-back position. It’s a bit of an advantage of him being in the back-three because it’s less physically demanding [after his injury return]. It helps us have him on the pitch for more minutes.”

An alternative option is Werner. He has long been a dirty name within the FPL community but the last four matches have seen four goals and three assists. Certainly, those activating a chip this week could have a fantastic differential on their hands.

FPL Doctore did it too.