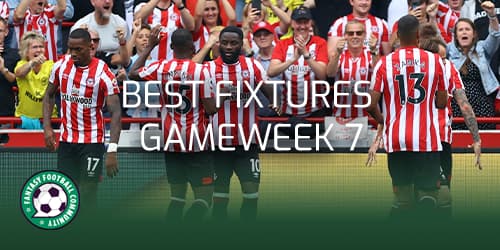 With Gameweek 6 now over FPL managers are tuning their attention to Gameweek 7. To help with these decisions we take a look at the teams with the best fixtures in Gameweek 7.

We have sorted the Fixture Ticker by difficulty and the four teams that sit top areLeeds, Arsenal, Brighton and Chelsea. We take a look at the teams with the best fixtures in Gameweek 7.

Leeds are top of the FFScout Fixture Ticker for Gameweek 7. They face newly promoted Nottingham Forest at home on Monday Night Football.

Leeds suffered a disappointing result in Gameweek 6, losing 5-2 away at Brentford. Marc Roca (£4.9m) scored his first Premier League goal for the club in Gameweek 6. Luis Sinisterra also returned a goal meaning the midfielder has now registered in back-to-back fixtures.

Nottingham Forest are top for expected goals conceded (xGC) so far this season (12.0) meaning that investing in the Leeds attacking players should bring returns.

Second on the Fixture Ticker for Gameweek 7 are Arsenal. Arsenal face Everton in Gameweek 7. The Gunners faced their first defeat of the season against Manchester United in Gameweek 6.

Gabriel Jesus (£8.1m) has returned in just one of the last three Premier League matches. As a result over 140,000 managers have sold the forward. This means that Jesus’s ownership has drop from nearly 81% to 78.1%.

Everton kept their first clean sheet of the season in Gameweek 6 with a 0-0 draw against Liverpool. However, Arsenal have scored eight goals at home so far this season. Only three teams (Man City, Liverpool and Brentford) have scored more and nine of Liverpool’s came in one match against Bournemouth.

Brighton sit third on the Fixture Ticker for Gameweek 7. They travel to newly promoted Bournemouth.

Bournemouth have had a difficult start to the season. They have conceded 18 goals between since Gameweek 2. This should bode well for Brighton’s attacking assets. Only Arsenal and Man City have scored more goals away from home than Brighton so far this season.

The midfield trio of Gross, Trossard and Mac Allister all offer exceptional value for money. They returned 31 points between them in Gameweek 7.

Chelsea are fourth on the Fixture Ticker for Gameweek 7. They face Fulham away in a London derby this weekend.

Ben Chilwell came on for 18 minutes in Gameweek 6 and in that time returned 10 points from a goal and an assist. Fulham have conceded in five of their opening six games of the season which bodes well for Chelsea’s attacking assets.

FPL managers will be awaiting Tuchel’s press conference to see if Aubameyang is available to make his first start in the Premier League for the club.