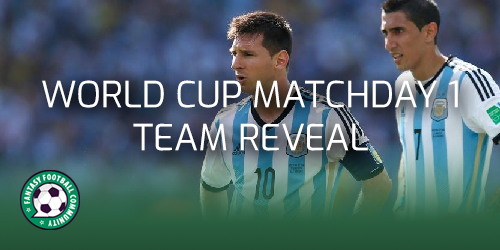 The 2022 World Cup starts today, so here is Marc Jobling with his team reveal for FIFA’s official Fantasy game.

As mentioned in my first draft article from Wednesday, the World Cup is a relief after a horrific few Fantasy Premier League (FPL) weeks and I hope to use this short Fantasy game as a confidence booster.

After taking their sweet time to eventually add many called-up players to the game, FIFA have caused community confusion over the game’s captaincy and transfer rules.

Honestly, that has affected my team below because even I’m not entirely sure what is happening.

After contradicting themselves over how often captaincy can be changed within a Matchday, there is now an answer.

The captain’s armband can be used twice per Matchday. You get one attempt to move it from a locked to unlocked player and it can even go to someone playing later that day.

Meanwhile, your Matchday transfers aren’t necessarily for the next round. They can either replace a locked player for the following Matchday or be used immediately between two unlocked players. So, if a team sheet brings bad news, you can quickly sell for someone else yet to play.

For example, as soon as the final game of Matchday 1 ends, we get two free transfers for Matchday 2. Whether we use them immediately or wait for mid-round team sheets is up to us.

If I have interpreted the Wildcard rules correctly, I will activate it in Matchday 2. All players will be locked once that round’s final match (Portugal v Uruguay) kicks off, yet the Wildcard is still active until full-time. So there’s 90 minutes to quickly use unlimited transfers to set up a Matchday 3 team.

This essentially means all three Matchdays will be like an FPL Free Hit.

With an unlimited number of manual substitutions allowed, I like this strong 15-man squad.

Ahead of these, the midfield is composed of mid-priced names that don’t need the long-term comfort that premiums bring to FPL. Steven Bergwijn ($7.0m) usually plays further upfield and, being in Group A, could be a captain.

Dani Olmo ($8.0m) and Andreas Skov Olsen ($6.0m) are against Costa Rica and Tunisia in Matchday 1, although Eden Hazard ($8.0m) doesn’t fill me with confidence.

Together with Angel Di Maria ($8.5m), Lionel Messi ($10.5m) forms an Argentina double-up to face Saudi Arabia. Both he and Kylian Mbappe ($11.5m) are megastars, who we know will be brilliant.

Additionally, Richarlison ($7.5m) is a good way to get Brazil coverage, as he seems to be their number one forward.