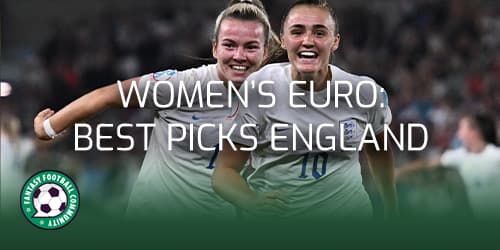 The 2022 Women’s EURO tournament is the highest scoring in the competitions history. Hosts England have made it to the Women’s EURO Semi-Final and will play again on Tuesday evening. We take a look at England’s underlying stats to aid FPL investment.

England have played four matches so far in EURO 2022, they have won all four fixtures.

In these four games they have scored 16 goals and conceded just one. Of the 16 goals, 12 have come from inside the box. England have created 78 goal attempts in the tournament so far making them the best team to invest in from an attacking stance. They have also hit the crossbar once.

England kept a clean sheet in all of their group stage matches. They conceded the only goal they have allowed in so far against Spain in the Quarter Finals. Goalkeeper Mary Earps has made seven saves across the tournament so far. She has returned 118.7 points in the competition so far.

Defender Lucy Bronze has also scored an impressive 93 points so far during the tournament.

Of the defenders only Leah Williamson has played every minute for England so far. Bronze is second for defenders for minutes played with 374. Millie Bright has played 345 minutes. Therefore these three defenders offer the best potential investments for surety of starts. Alex Greenwood could be an option for managers wanting to use the Supersub chip.

No midfielder has played every minute for England so far in the competition. Keira Walsh has the most minutes played with 386. Stanway has played less minutes with 335, however her two attacking returns make her a more attractive pick. Like Greenwood, Russo also looks a good option for the Supersub chip.

Up front Hemp has played the most minutes of the forwards however she has only scored one goal. Mead is second for minutes played and she has scored the most goals for England. Ellen White has only played 223 minutes but in that time has scored two goals.

Who to invest in for the Women’s EURO Semi Final?

At the Women’s EURO Semi-Final stage managers will need to invest heavily in the four teams left in the competition. The standout picks from England appear to be Mead, Earps and Bronze look like the best picks. However, managers should consider Russo or Greenwood for the Supersub chip.