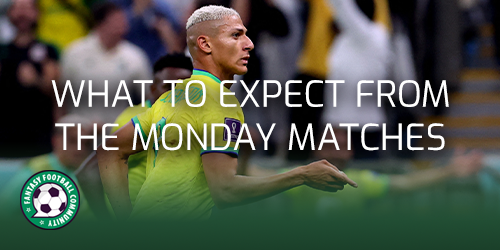 The World Cup round of 16 is progressing and on Tuesday it will come to its end. We take a look at what to expect from the Monday matches, including Japan v Croatia and Brazil v South Korea. We will also highlight the key players, all with a World Cup Fantasy perspective.

Looking at what to expect from the Monday matches could be vital for fantasy managers. Picking out significant players or form can assist with decisions like captaincy, the use of transfers and chip strategy for the round ahead.

Croatia face Japan in one of the two Monday matches. They were grouped with Belgium, Morocco and Canada. The Croatians found it difficult to break teams down that defended well. The matches against Belgium and Morocco were good examples of that (both 0-0).

However, when teams come out to attack, leaving plenty of space, they were dangerous. Canada threw their attack at Croatia and the Croatian’s picked them apart. Japan like to attack and that could give Croatia a better chance of performing.

Defender Borna Sosa (£3.5m) is a solid option for World Cup Fantasy managers ahead of the game. Croatia defend well and that could mean plenty of defensive potential. Midfielder Ivan Perisic (£7.5m) is another key player. His two assists against Canada are a good reflection of his potential.

Japan like to attack and against Germany and Spain, that was clear. The Japanese were clearly very strong against teams that underestimated them. Germany and Spain threw everything at Japan which left them both vulnerable on the counterattack.

Japan struggled to break Costa Rica down in Matchday 2. Costa Rica respected that Japan were strong offensively, so sat back, soaked the pressure and scored to win the game. Japan may struggle against a Croatia side that will be fully aware of their counter attacking ability and that defend well.

Failing to keep a single clean sheet in the group stages is a major concern and could put managers off investing in their defence. Offensively, although good, Japan rotate their attacking players which is another concern when looking at their attacking assets.

Brazil face South Korea on Monday and with the talent they have at their disposal should be winning the game comfortably. They won both of their matches against Serbia and Switzerland and looked the most dominant and dangerous side.

The Brazilians also kept two clean sheets in the group stages which could highlight them as a defence to invest in moving forward. The main issue is that some of their defensive assets are a doubt or chasing full fitness ahead of the game, which could put fantasy managers off.

There are plenty of options in the Brazil attack and with Neymar fit, things could be wide open in terms of investment. However, the focal point to the attack and the cheapest way into it is Richarlison. The striker bagged a brace in his first game so could be the favourite.

It was a mixed group stage for Soth Korea in their success to the last 16. They won one, drew one and lost one. What was impressive was their ability to score goals and they showed that against teams that attacked them.

South Korea conceded in two out of three of their matches so defensively it could be wise to avoid them. In terms of their attack, South Korea’s goals have been quite spread which could make it difficult identifiying a standout option.

Keep up to date with all of our World Cup Fantasy articles right here.