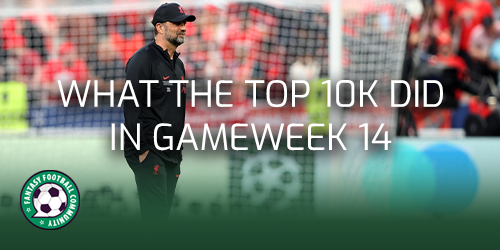 Using the popular FPL website Live FPL we can see what the FPL top 10k did in Gameweek 14. We can look at what chips were used, the most owned players, and which player were the most captained. We overview some of the most important statistics during the new round.

Tracking the best ranked FPL managers in the world can really help us making future decisions within our own teams. In addition, it also gives us a good knowledge regarding ownership, captaincy and much more. Seeing what the top 10k did in Gameweek 14 can also be very insightful and managers can see which players will have a good or bad effect on their rank.

We can see that Man City striker and the highest scoring player in FPL Erling Haaland is going into Gameweek 14 with 143% effective ownership. Newcastle defender Kieran Trippier hit a huge 93% this week.

Man City defender is going into the Gameweek with a massive 84% ownership.

We can see that Haaland has been captained by more than half of managers. The striker has failed to make the Man City squad due to injury. This means many managers will have to rely upon their vice captains.

Below, we can see what percentage of the top 10k managers have used their chips. We can see chip usage for both Gameweek 14 and in general. The most used chip this week is the Bench boost. The bench boost was used by 1.32% of managers.

You can get yourself prepared for the new round of Champions League Fantasy by staying up to date with our latest articles, right here.