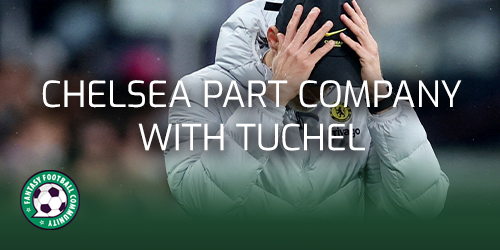 This morning Chelsea announced that they had parted company with manager Thomas Tuchel. Chelsea had won three of their opening six Premier League matches. The decision came on the back of their Champions League Matchday 1 defeat. We assess what is next for Chelsea.

Chelsea had had a mixed start to the season, winning three, drawing one and losing three of their matches so far. However, Tuchel had been backed by the new owner in the transfer window. The Blues had signed players that the manager specifically wanted such as Pierre-Emerick Aubameyang (£9.0m).

This means that Chelsea’s tweet this morning was a surprise to FPL managers and football fans alike.

The statement put out by Chelsea stated:

As the new ownership group reaches 100 days since taking over the Club, and as it continues its hard work to take the club forward, the new owners believe it is the right time to make this transition.

Chelsea’s coaching staff will take charge of the team for training and the preparation of our upcoming matches as the Club moves swiftly to appoint a new head coach.

There will be no further comment until a new head coach appointment is made.

Who could take over?

The bookmakers all have Potter as favourite to take over at Chelsea. They also have ex-Spurs boss Mauricio Pochettino, who is currently clubless after parting company with PSG, as second favourites. Other names linked with the job include Leicester City manager Brendan Rodgers and Zinedine Zidane.

What does this mean for Chelsea in FPL?

Chelsea have a good run of fixtures which many FPL managers were planning to target as part of their Wildcard decisions. This could still be a good idea

Most clubs experience new manager bounce when a new boss arrives at the club. This means that the new managers is able to get better performances out of the players as they often up their game. Therefore for FPL managers should be able to see a bounce in the fortunes of Chelsea’s FPL assets.