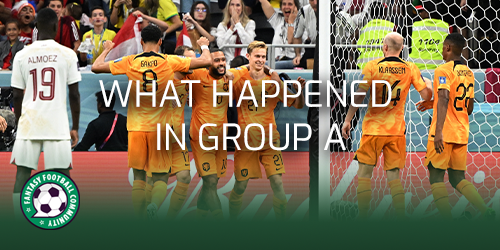 The World Cup continues. As the final round of Matchday 3 progresses, we can look back and reflect upon results and teams that have progressed to the latter stages of the competition. We overview the first group and look at what happened in Group A.

Looking at what happened in Group A can help World Cup Fantasy managers prepare for next round ahead. Overviewing the results, player performances and key fantasy assets can aid in important factors like transfers, captaincy and chip strategy.

Below is a table overviewing the group as a whole. We can see that Netherlands and Senegal have both progressed to the next stage of the World Cup.

Matchday 1 arrived, and Netherlands came into the group stages as firm favourites to progress. The Dutch faced the tough task of overcoming the African Cup of Nations Champions. The Senegal defence held until the latter stages of the match but were undone. Netherlands did well to break them down and it was striker Coady Gakpo that broke the deadlock, provided by midfielder Frenkie De Jong. The second goal came from midfielder Davy Klaassen.

Matchday 2 came, and Netherlands had their first win under their belt. Ecuador put in a solid performance against Qatar, but many had questioned their quality. Ecuador made it difficult, but Netherlands looked offensively inept for large parts of the game. The same two players who stood out for Netherlands in Matchday 1 came good. Davy Klassen created his second goal of the tournament whilst Cody Gakpo scored his second. But it wasn’t enough as Netherland drew the match 1-1.

Netherlands won the group and Cody Gakpo, Frenkie De Jong and Davy Klaassen all stood out. World Cup Fantasy managers did have high hopes for striker Memphis Depay and defender Denzel Dumfries, but both failed to hit their usual fantasy standards.

Defensively, the Dutch looked good, and they ended their group stages with two clean sheets. Although they won the group, Netherlands did lack in terms of creating chances, especially against Ecuador. It will be very interesting to see how they fair against tougher opposition.

The African Cup of Nations champions faced Netherlands in Matchday 1. Senegal knew it would be their toughest game and they had to do it without Sadio Mane. Mane was ruled out of the competition due to injury. Senegal defended well but a couple of defensive mistakes ruined their performance and meant they lost the game 2-0.

Senegal came into Matchday 2 knowing they needed a win. Qatar lay ahead. The African’s won 3-1, but the fact they conceded a goal against the worst offensive side in the competition was concerning. The goals came from their strikers, Boulaye Dia, Famara Diedhiou and Bamba Dieng. At this point, there was still no clear attacking asset to invest in for fantasy mangers.

The final game of the group stages arrived for Senegal. With just three points under their belt, they had to win to progress. It was a thrilling game against Ecuador who only needed a draw or win to secure advancement. Ecuador fell to pieces and Senegal won the game 2-1. Striker Ismailla Sarr scored from the penalty spot and defender Kalidou Koulibaly scored the winner after Ecuador equalised.

Senegal beat a very tricky Ecuador so fully deserved to progress. Although they scored five goals in their group stage, it is still difficult to pick out key fantasy assets. Their defence was disappointing and failed to keep a clean sheet in any of their group stage matches.

What fantasy managers could take away is that Ismailla Sarr appears to be on penalty duty.

Ecuador faced the hosts in Matchday 1, Qatar. The South American’s were absolutely dominant and won the match 2-0. Enner Valencia was dangerous throughout the match and ended up scoring both of Ecuador’s goals, one from the penalty spot and the other from a fantastic header. Ecuador kept a clean sheet and defender Angelo Precaido stood out. Preciado also created an assist which meant he ended the match with plenty of points.

Ecuador continued their great form with a tough match against Netherlands. In fact, Ecuador were arguably the better side. After conceding early, they needed a goal, and that goal came from Enner Valenica. This took Valencia’s total to three goals. The match finished 1-1 and put Ecuador in a great position going into Matchday 3 with four points.

A draw was enough for Ecuador in Matchday 3. However, Senegal were strong and played much better than many fans thought they would. Ecuador did equalise after the first Senegal goal but failed to hang on. Ecuador’s most important player, Enner Valencia, had a poor match and it was a game he couldn’t afford to.

Ecuador fell at the last hurdle after putting themselves in a solid position going into their final match. Enner Valencia was their main man throughout the competition but when they needed him the most, failed to impress.

The hosts lost all of their matches by two goals or more. Their only goal was scored by Mohammad Muntari and created by Ismael Mohammad. Qatar were awful defensively and offensively and did not have the quality to compete with teams of this level.

Did you miss the England v Wales match? We take a look at the line-ups, key moments and standout World Cup Fantasy performances right here.