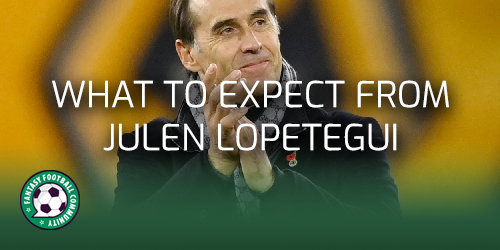 He inherits a goal-shy team that is rooted to the bottom of the Premier League, four points from safety, so a strong start is very important if Wolves want a fifth season in the top flight.

Will the 56-year-old spark a surge up the table and what Fantasy Premier League (FPL) impact will he have?

With this in mind, this preview from Fantasy Football Scout’s full article will attempt to answer such questions below.

One factor that could have influenced Wolves’ poor start is the shift from an established back-three system to a four-man defence. Yet Lage’s downfall may benefit Lopetegui, as he exclusively uses either a 4-3-3 or 4-2-3-1 formation.

A meticulous tactician who wants his teams to play with a high tempo and intense counter-press, he likes short passing and encourages his extremely attacking full-backs to create overloads high up the pitch.

By providing attacking width, it allows the pair of inside forwards to be narrower and link up with a fluid midfield that passes its way through opponents.

FOR A LOOK AT HIS HISTORY, TACTICS AND PLAYING STYLE, CHECK OUT THE FULL ARTICLE HERE