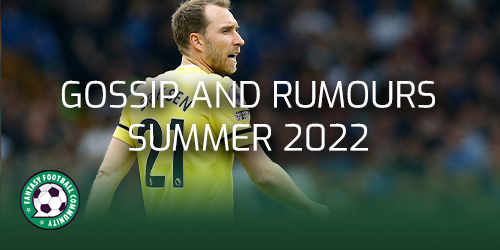 The Express are reporting that Christian Eriksen, has decided to leave Brentford. They suggest he favours a return to Spurs or even Manchester United.

Talk Sport also seem to confirm the link to Spurs and Manchester United.

FPL Comment: Eriksen has a fantastic record in FPL. He returned 1098 FPL points for Spurs in the game between 2013/14 and 2019/20. Eriksen’s record with Brentford this season suggests that he is still a fantastic FPL asset and would be a great own in 2022/23.

Romano is reporting that Derby Country’s Malcolm Ebiowei will play in the Premier League next season. He reports that both Manchester United and Crystal Palace are interested in signing the 18 year old right winger. Ebiowei signed for Derby from Rangers B last September.

FPL comment: Ebiowei made 16 appearances in the Championship last season, returning one goal and two assists. The winger also made seven appearances in the U18 Premier League and returned more than one return per match, with seven goals and one assist. He would need to get regular minutes in the League to make him a good FPL option.

OddsOnFPL has reported that these are the opening six Gameweeks of the Premier League season.

FPL comment: If these fixtures are correct then they would make Manchester United popular targets. West Ham also look to have potentially promising fixtures at the start of the new campaign.

The Athletic: Nunez to Liverpool

Yesterday the rumour was that Liverpool and Manchester United were competing for Darwin Nunez signature. Today The Athletic are reporting that Liverpool have reached an agreement with the player.

FPL Comment: As reported yesterday Nunez scored 32 goals for Benfica in the 2021/22 season. Six of these goals came in the Champions League including a goal in each of the two quarter-final matches against Liverpool. The forward could be a fantastic asset to FPL managers if he arrives at Anfield.

The Football Insider are reporting that West Ham are interested in signing  Michael Keane from Everton. This come after Everton were rumoured to have won the race to sign James Tarkowski from relegated Burnley on a free transfer.