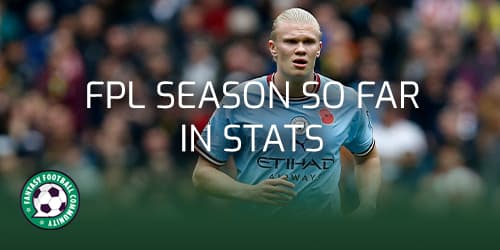 The World Cup in Qatar has given FPL managers the opportunity to stop and reflect on their team. Normally at this stage in the Premier League season most managers would have already used their first Wildcard Chip and would be making do with free transfers and points hits until the second window opens. However, with the unlimited transfer window now open FPL managers can make wholesale changes if they want too. We run through the underlying stats of the season so far to help managers make informed decisions.

After 16 gameweeks so far this season the underlying stats are a really useful tool for FPL managers. With World Cup matches and a five week break in the season form could change but none the less looking at the stats is a great place for FPL managers to start when tinkering with their teams during the unlimited transfer window.

Newcastle’s Kieran Trippier (£5.9m) has kept the most clean sheets so far this season. The defender has registered nine so far. Ben White (£4.7m) and Fabian Schar (£4.9m) have both kept eight clean sheets. As has midfielder Miguel Almiron (£5.8m) although he only picks up the one point per clean sheet.

Harry Kane (£11.6m) has earned more bonus points than any other player so far this season. The Spurs forward has registered 21 so far. Erling Haaland (£12.2m) is second with 19 bonus points, closely followed by Keiran Trippier (£5.9m) who has picked up 17.

Jesse Lingard (£5.4m) and Pedro Neto’s (£4.9m) prices have both fallen by more than any other player so far this season. Both have dropped £0.6m in value.

Playing World Cup Fantasy? Check out our articles to help you make all the right decisions!