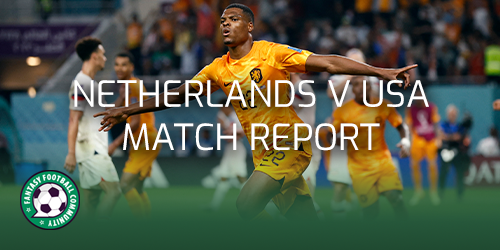 The World Cup continues. Our first match in the last 16 begins. We take a look at the Netherlands v USA game. We will highlight the line-ups, pick out the key moments and standout World Cup Fantasy performances during the match.

Many within the World Cup Fantasy community have excluded defender Denzel Dumfries (£6m) from their drafts, who starts. Striker Memphis Depay (£8.5m) will be looking to improve his form this campaign, he also starts.

Midfielder Christian Pulisic (£7.5m) starts the match. He will be looking to extending his fantastic form and some within the community may have backed him in their drafts. Defender Sergino Dest (£5m) also starts, who has also been impressive.

Denzel Dumfries came out on top. His 14 points consisted of two assists and one goal. Fellow defender Daly Blind wasn’t far behind after hitting 11 points for his goal and assist. Memphis Depay collected seven points for his goal. Christian Pulisic picked up six points for his assist whilst his teammate Haji Wright matched that with his goal.

USA played worse than I thought they would whilst Netherlands were lethal on the counterattack. It is nice to see Denzel Dumfries hitting attacking returns because he was underwhelming in the group stages. Memphis Depay looks very sharp again and we could see him and Denzel Dumfries combining for goals like they used to once more.

What happened in Group G? We pick out the goals, assists and key players involved in our article here.