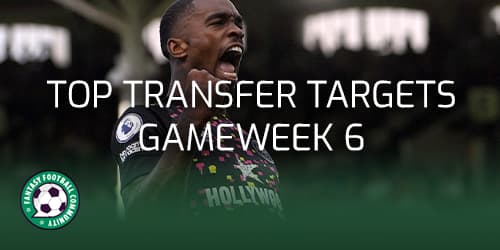 Watching the transfer market is one of the biggest parts of FPL management. This is especially true in the early parts of the season. Ensuring that your players don’t drop in price and cost you team value is key. We assess the transfer market and the most popular transfers for Gameweek 6.

Players rise and fall in price in FPL based on the number of transfers in or out they have. Here we look at who has been transferred in and out the most ahead of the deadline.

Even after blanking in Gameweek 5 Pascal Gross remains a popular transfer. Only Haaland has been bought by more FPL managers that the Seagull’s midfielder this week. Gross has over 568,000 new managers ahead of the Gameweek 6 deadline.

Wilfried Zaha has been one of the most consistent players in the league so far this season. He has returned in all of the last three matches that he has played in returning 26 points in those three Gameweeks. The midfielder faces Newcastle in Gameweek 6 and has over 474,000 new managers ahead of the trip up north.

Ivan Toney had an expect goals tally of 1.41 in Gameweek 1-3, however in Gameweek 4-5 it has dropped to 0.41. As a result he has been sold by over 333,000 managers. His dip in form has coincided with the continued form of Mitrovic.

Wondering who to captain in Gameweek 6? Check out our recent article.