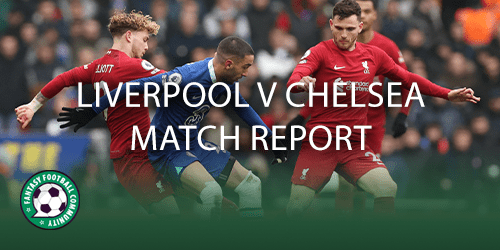 Taking a look at line-ups, goals, assists, clean sheets and anything else we could highlight that could have implications for FPL managers. We cover the Liverpool v Chelsea match report. Covering eye test and key moments through-out the match with the help of the Fantasy Football Scout members area.

Overviewing the Liverpool v Chelsea match report can be helpful in identifying key moments in the match. This can then give FPL managers a good insight into which players and teams looked good, key injuries, fitness and even more to help us make decisions in FPL.

Defender Trent Alexander-Arnold (£7.3m) and striker Darwin Nunez (£8.8m) both fail to start the match due to injuries. Many could be hoping midfielder Mohamed Salah’s (£12.8m) form improves after three back-to-back blanks.

New signing and midfielder Mykhailo Mudryk (£7m) fails to start for his debut but makes the substitute bench. Midfielder Lewis Hall (£4.4m) makes his third consecutive start in the Premier League because of his good performances.