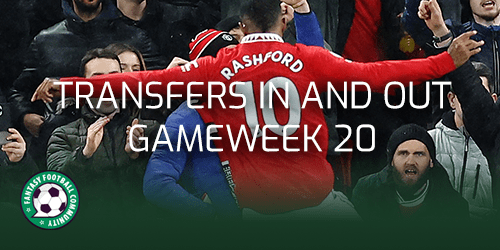 The Gameweek 20 deadline follows the FA Cup fixtures this weekend. Indeed, there are still two fixtures to be played in Double Gameweek 19. Here we assess the transfer market and the key FPL transfers. FPL managers can also check who is popular and who isn’t through the Official FPL website.

Gameweek 19 finishes next week when Chelsea and Fulham meet in their rescheduled fixture. There is no FPL deadline this coming weekend as the FA Cup third round will be played. The Gameweek20 deadline is on Friday 13th of January, ahead of Aston Villas clash with Leeds. here are the most popular FPL transfers so far.

After scoring again in Gameweek 19 Marcus Rashford (£7.0m) is the most transferred in player ahead of Gameweek 20. Rashford only has a single Gameweek in Gameweek 20 and he faces Manchester City. The derby hasn’t put off the 184,000 managers who have purchased the midfielder so far.

Harry Kane (£11.6m) registered a brace in Gameweek 19 as well as picking up an assist and all three bonus points. The forward, depending on the FA Cup results, is scheduled to play twice in Gameweek 20. Kane should face Arsenal and Man City, two matches he scored in last season, and two teams he has a good record against. Kane is now the second most popular transfer in with over 165,000 new managers so far.

Aleksandar Mitrovic (£6.9m) was booked in the first match of Gameweek 19. This means that the forward is suspended for the game against Chelsea which made up the second match of Fulham’s double. Mitrovic will be available again for Gameweek 20 when Fulham play in form Newcastle. Over 156,000 managers have signed the forward.

Luke Shaw (£5.1m) registered a goal and a clean sheet in Gameweek 19, also picking up bonus points for his owners. The defender has been in excellent form since returning from the World Cup. Over 144,000 FPL managers have bought the defender so far since the Gameweek 19 deadline last weekend.

Even though Martin Odegaard (£6.6m) blanked in Gameweek 19 he is still the fourth most popular transfer in. The Arsenal captain picked up a booking in Gameweek 19 during the Gunners 0-0 draw with Arsenal. over 138,000 managers have signed the midfielder this week, ahead of Arsenal’s North London Derby match away at Spurs.

Leandro Trossard (£6.8m) is the most transferred out player so far ahead of the Gameweek 20 deadline. The Brighton midfielder didn’t feature in Gameweek 19 and hasn’t returned now since Gameweek 15. Over 175,o00 managers have sold Trossard so far this week.

Ivan Toney (£7.4m) picked up an injury in Gameweek 18 which saw him miss out in Gameweek 19. As a result the Brentford forward is the second most transfered out player. Over 154,000 managers have sold him so far.

Liverpool’s Mo Salah (£12.9m) is the third most transferred out player. Liverpool have been struggling for consistency recently and Salah has now failed to return in the last two Gameweeks. Over 140,000 managers have parted company with the most expensive player in the game.

Salah’s teammate Darwin Nunez (£8.9m) is one of the key FPL transfers out this week so far. The forward has had a lot of chances since the restart but has failed to score so far. A lot of managers have become frustrated with the Liverpool man. Over 107,000 managers have sold him since the Gameweek 19 deadline.