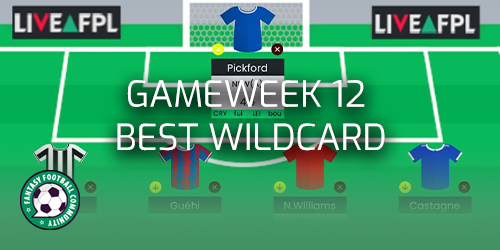 Looking at the Gameweek 12 best wildcard team. Using the Fantasy Football Scout season ticker, we can see which teams have the best run of fixtures. This can then aid FPL managers in picking out some of the best assets for the run ahead.

Everton rank second on the fixture ticker up until Gameweek 16. The Toffees are amongst the best two teams in the league for goals conceded and clean sheets kept in the last six matches. Everton also concede lots of shots in the box. This could give Jordan Pickford (£4.5m) multiple routes to FPL points, especially if he keeps the clean sheet.

Leicester goalkeeper Danny Ward (£4.1m) will sit on the bench and come on Pickford fails to start.

Marc Guehi (£4.3m) comes in a fantastic price in the game. A price that can really help to enable funds elsewhere. Crystal Palace also rank first on the fixture ticker. Guehi has the potential to keep clean sheets. Newcastle man Kieran Trippier (£5.5m) has proven to be one of the best defensive assets in the game this season so far. Not only have the clean sheets been there, but Trippier also provides additional routes to points from his set piece and distribution ability.

£4.1m Nottingham Forest steps in for one of the players on the bench who blank in Gameweek 12. Although defensively poor, Williams has shown goal threat this season. It could be a Gameweek where owners hope for the best and bench him after that up until the World Cup. Leicester are another team who have not been at their defensive best. However, with several great games coming up and attacking potential, Timothy Castagne (£4.4m) could be a great differential.

Joao Cancelo (£7.2m) is currently the best FPL defensive asset in the game. Man City play some great fixtures after their blank in Gameweek 12, so after that, he’ll be moved back into the starting line-up.

Liverpool rank third on the fixture ticker. Mohamed Salah (£12.7m) has been far from his best this season. However, with this recent burst of form, we could well see that form improve. Andreas Peirera (£4.6m) could be another easy inclusion. The midfielder has attacking threat and that was proven with his recent goal. After Gameweek 12 Andreas can be benched whilst Gabriel Martinelli (£6.6m) waits patiently to replace him.

Leicester have been firing this season. In fact, the Foxes have already netted two or more goals in over half of their matches played this season. Amongst all players in the league, midfielder James Maddison (£8.1m) ranks fifth for attempts on goal. Again, Crystal Palace rank first on the fixture ticker. They play against some of the worst defences in the league and for that reason, penalty taker and midfielder Wilfried Zaha (£7.4m) makes the team.

Arsenal have been the best team in the league so far. At the time of writing, they sit top of the Premier League. They are also displaying some of the best attacking stats. Martinelli has been a huge contributor towards their goals and form. The amazing price-tag and great form means he makes the team.

Aleksander Mitrovic (£6.7m) has been putting up some of the best attacking stats in the league this season. The striker has three great fixtures ahead of him. Dominic Solanke (£5.7m) has proven he has potential as of late. He also takes his teams penalties, whilst his team also rank fourth on the fixture ticker. He is another player that can be benched to allow Erling Haaland (£12.2m) in for Gameweek 13.

Haaland sits on the bench until he faces some of the worst recent defences in the league.

You can check out our big range of FPL articles right here.