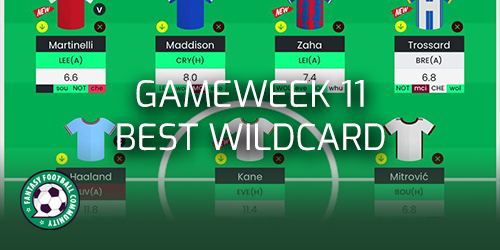 Looking at the Gameweek 11 best wildcard team. Using the Fantasy Football Scout season ticker, we can see which teams have the best run of fixtures. This can then aid FPL managers in picking out some of the best assets for the run ahead.

Crystal Palace rank first on the fixture ticker. For that reason, investing in the Crystal Palace assets could be beneficial. Vicente Guita (£4.5m) could be considered. His price enables the rest of the team whilst also offering up some potential for clean sheets with the good fixtures ahead.

Danny Ward provides as a solid back up at just £4.1m.

Newcastle defender Kieran Trippier (£5.5m) is now the second highest returner in FPL amongst defenders. With four consecutive returns, taking set pieces and fantastic distribution stats, he is an easy inclusion. Chelsea defender Reece James (£6.1m) also makes the cut. Chelsea are improving at the back under Graham Potter and he seems to favour the wing back system. This suits Reece James. The defender proved his potential against AC Milan in the Champions League after he managed to score a goal, create an assist and keep the clean sheet.

Joao Cancelo (£7.3m) ranks as the highest scoring defender in the game. The Man City defender has already collected three double-digit hauls this season and with his team’s elite defensive ability, could easily sustain FPL returns. Both Matty Cash (£4.6m) and Jordan Zemura (£4.4m) fill the bench. When it comes to having to bench the Man City and Arsenal assets for the blank in Gameweek 12 their sides face Fulham and Southampton. Both have clean sheet and some attacking potential.

Gabriel Martinelli (£6.6m) has proved excellent value for money this season. Arsenal are first in the league and a large contributor towards that is the Brazilian. Martinelli is Arsenals current highest scorer in FPL. With six returns already, the midfielder could be hard to exclude. Leicester play against three struggling defences in the next three Gameweeks. The foxes have scored two or more goals in more than half of their matches played. For that reason, investing in the in-form James Maddison (£8.2m) could be wise.

Leandro Trossard (£6.8m) looks to be in-form. The Belgian has racked up over 30 points in his last three matches. Buying him at the right time could be key, and that time could be now. Trossard comes up against two of the worst recent defences in the league in the next two matches. This means there could be plenty of potential for him. Fulham man Andreas Pereira (£4.6m) makes the team due to both his attacking potential and price. The budget midfielder proved to have some attacking potential after his goal in the previous Gameweek.

Two of the most in-form and highest scoring strikers in the Premier League make the team. Erling Haaland (£12.2m) comes up against a defensively ropey Liverpool in Gameweek 11. Reinforced with his unmatched attacking stats, the Man City forward also takes the captaincy armband. Tottenham striker Harry Kane has now returned in every match he’s played this season excluding one. His form is hard to ignore and for that reason is an easy inclusion.

Aleksander Mitrovic (£6.8m) failed to start the last match so it could be worth monitoring the upcoming Fulham press conference. The striker is up there with some of the best players in the league for offensive stats. Being both the focal point of the Fulham attack and the penalty taker only adds to his appeal.

Which teams have the best fixtures in Gameweek 11? We answer that here.